You are using an outdated browser. Please upgrade your browser to improve your experience.
by A.T. Faust III
October 25, 2011
Steve Jobs isn't finished. With revelations laid out in the pages of Walter Isaacson's newest bestseller, Apple stock -- slumping somewhat in a post-4S lull -- is up big yet again. But the excitement is far more far-reaching than the investor's portfolio. And it has nothing to do with the mobile industry. In fact, if Apple unveils what's expected, it'll be the company's least mobile product ever: an Apple TV set! First excerpted by the Washington Post, Isaacson writes of his iconic subject:

He very much wanted to do for television sets what he had done for computers, music players, and phones: make them simple and elegant... ..."I’d like to create an integrated television set that is completely easy to use," he told me. "It would be seamlessly synced with all of your devices and with iCloud." No longer would users have to fiddle with complex remotes for DVD players and cable channels. "It will have the simplest user interface you could imagine. I finally cracked it."

Of course, though Jobs may have solved said riddle, we're left with a hefty one of our own until Apple finally reveals the fruits of its late founder's labor. Still, we're pretty confident we've got the answer; and, as the hints and implications unveiled by the book are slowly digested, many other sites and analysts are coming to our same simple conclusion: Apple will -- sometime in the second half of 2012 -- release a dedicated, all-in-one television set with iCloud synching, FaceTime, built-in DVR capability, a provider-agnostic decoding system, and (probable) third-party app support. Oh, and full Siri voice control! Yes, that last bit, we believe, was the final piece of the puzzle for Jobs. In theory, this flagship feature would completely change the decades-old model of TV control. Siri would replace the slow, tedious search process to which we've all grown begrudgingly accustomed, and the assistant would allow for easy, detailed filtering of one or more specific search and scheduling criteria. As with Siri on the iPhone 4S, you'd query and instruct your TV in a number of different, ever more personal ways. "What movies are on right now?" you could ask, and Siri would show you. Depending on your subscribed programming, the list could be quite large. Narrow it down. Just tell Siri to filter by genre: "Show me every science fiction film." Still too big. "I want to watch one starring Harrison Ford." A few excellent options remain. But, since you want the very best that cinema has to offer, you simply say to Siri, "Blade Runner." But then you remember Tom Brady's playing, and you'd really rather watch the game. "Siri," you say, "record Blade Runner and change it to the Patriots game." Touchdown! Still, that's just one example. In reality, Siri would help you (and your loved ones) with every aspect of your TV's control. Tell her you want to play a PlayStation game, and she switches the set's input accordingly. Your confused Dad won't have to fret figuring out how to get back to live TV, either. He could just say, "I want to watch TV," and Siri would save you an irritated (and irritating!) parental summons. As for details of the unit itself, we can make a few safe assumptions. For starters, models will likely vary by screen size; and we'd be surprised if Apple offered more than three such variants. "Small," "Medium," and "Large" seem about right. Additionally, though Apple's not so hot on physical media anymore, we think they'd actually include a DVD/Blu-ray multi-drive in a project like this. The living room, after all, is the decided last bastion for the non-digital library, and it'll be some time before society's ready to give that up. In terms of panel quality and unit design, we expect the Apple TV to boast a 1080p IPS panel tucked inside another aluminum Jony Ive masterpiece, although the whole shebang should be thinner and lighter than a comparably-sized iMac-type rig. It's got to hang on a wall, you know? However, one thing we're still philosophically stumped about is whether or not 3D functionality would be included. Apple seems more or less uninterested in adding the "gimmicky" tech to its iDevice lineup, but TVs are a vastly different proposition. Many consumers would be hard pressed to shell out a $500-1000 premium for a display unable to support the third dimension. (Personally, I'd be pretty reluctant to buy a new TV -- Apple or not -- that can't support 3D video games and sports/nature programming.) For what it's worth, LG -- a known Apple display OEM -- has a nifty passive 3D solution already in production; and its ease-of-use and overall segment superiority make it a compelling add-on for anything Apple's likely to announce. 3D might never be the true focus of the industry's future, but it's an enticing value-add for just about any TV purchase. As far as the purported set's operating system and companion non-Siri interface, we think the Apple TV will run a customized iOS build and look something like, well, Apple TV. There's no question that the small black square's been a "hobby" for Apple these past few years, but there is some question as to how far-reaching the little hub's influence will turn out to be. It has largely succeeded in bringing a usable "10-foot user interface" into the iOS fold; and, while still imperfect, the UI likely represents a stylistic direction for the new project's on-screen presentation. Every current Apple TV feature you know and love, like AirPlay mirroring, YouTube browsing, movie downloads, and iTunes Home Sharing should be polished up and make the jump. There's even room for all those streaming service rumors that the iCloud reveal initially unleashed. To control its interface, of course, the Apple TV will need a remote. That remote, though, will need to be better and a bit more substantial than the current seven-button, IR affair. It'll probably include a microphone, too, unless Apple manages to build an effective crowd mic into the actual TV itself. Naturally, whichever method Apple deems most intuitive will be the method we ultimately get. So, there you have it -- The Apple TV is coming. Those are our expectations, at least. And, to be honest, the whole idea makes a lot of sense. Apple's already conquered the personal computing and mobile spaces, and the latter bears many similarities to the challenges Cook and company face in bringing a unified TV experience to market. Perhaps cable and satellite bargaining here replaces the carrier restrictions the iPhone's had to endure, but Apple -- more than any other brand -- has the clout and tenacity to garner maximum positive compromise from any such situation. Apple can do it because that's what Apple does. Redefining consumer ideas and expectations is in Apple's blood. Mark our words: There will be an Apple TV. And it's going to be big. [gallery link="file" columns="5" orderby="title"] 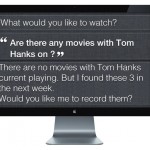 New Apple TV To Be Standalone Set, Include Siri Controls?

New Apple TV To Be Standalone Set, Include Siri Controls?
Nothing found :(
Try something else