You are using an outdated browser. Please upgrade your browser to improve your experience.
by Joe White
October 6, 2011

Yesterday, Apple co-founder and former CEO Steve Jobs passed away, following a lengthily battle with pancreatic cancer. Today, dedications to the genius responsible for bringing us the iPhone, iPad and Mac have been hitting the Web hard and fast. Below, we've outlined a series of them for you to read through.

We'll keep updating this article as more are published. In the meantime, feel free to leave your own thoughts on the Apple visionary in the comments.

If you head over to Apple's website, the above image is displayed and visitors are presented with the following message on a special "Steve Jobs, 1955-2011" webpage:

Apple has lost a visionary and creative genius, and the world has lost an amazing human being. Those of us who have been fortunate enough to know and work with Steve have lost a dear friend and an inspiring mentor. Steve leaves behind a company that only he could have built and his spirit will forever be the foundation of Apple.

Apple also has a "[email protected]" email address, to which fans can email their own personal dedication to Steve Jobs.

Google has added a simple, sweet dedication to Steve Jobs on its homepage, which reads: "Steve Jobs, 1955-2011." The dedication is linked to the above Apple webpage.

Apple's Board of Directors

Apple's Board of Directors issued a statement yesterday, which read:

We are deeply saddened to announce that Steve Jobs passed away today. Steve’s brilliance, passion and energy were the source of countless innovations that enrich and improve all of our lives. The world is immeasurably better because of Steve. His greatest love was for his wife, Laurene, and his family. Our hearts go out to them and to all who were touched by his extraordinary gifts.

Following the above statement, Steve Jobs' family also published their own statement:

Steve died peacefully today surrounded by his family. In his public life, Steve was known as a visionary; in his private life, he cherished his family. We are thankful to the many people who have shared their wishes and prayers during the last year of Steve’s illness; a website will be provided for those who wish to offer tributes and memories. We are grateful for the support and kindness of those who share our feelings for Steve. We know many of you will mourn with us, and we ask that you respect our privacy during our time of grief.

It's easy to forget that the man behind Apple was clearly also a loving father and husband, and our thoughts are with Steve Jobs' family.

Apple has lost a visionary and creative genius, and the world has lost an amazing human being. Those of us who have been fortunate enough to know and work with Steve have lost a dear friend and an inspiring mentor. Steve leaves behind a company that only he could have built, and his spirit will forever be the foundation of Apple. We are planning a celebration of Steve’s extraordinary life for Apple employees that will take place soon. If you would like to share your thoughts, memories and condolences in the interim, you can simply email [email protected]. No words can adequately express our sadness at Steve’s death or our gratitude for the opportunity to work with him. We will honor his memory by dedicating ourselves to continuing the work he loved so much. Our thoughts and prayers are with his wife Laurene and his children during this difficult time.

President Obama, who owns an iPad and who has met with Steve Jobs before, published the following tribute, in which he notes that "the world has lost a visionary." It reads:

Michelle and I are saddened to learn of the passing of Steve Jobs. Steve was among the greatest of American innovators - brave enough to think differently, bold enough to believe he could change the world, and talented enough to do it. By building one of the planet’s most successful companies from his garage, he exemplified the spirit of American ingenuity. By making computers personal and putting the internet in our pockets, he made the information revolution not only accessible, but intuitive and fun. And by turning his talents to storytelling, he has brought joy to millions of children and grownups alike. Steve was fond of saying that he lived every day like it was his last. Because he did, he transformed our lives, redefined entire industries, and achieved one of the rarest feats in human history: he changed the way each of us sees the world. The world has lost a visionary. And there may be no greater tribute to Steve’s success than the fact that much of the world learned of his passing on a device he invented. Michelle and I send our thoughts and prayers to Steve’s wife Laurene, his family, and all those who loved him.

Below, we have included more tributes to Steve Jobs that have been circulating online.

Steve Jobs is the most successful CEO in the U.S. of the last 25 years. He uniquely combined an artists touch and an engineers vision to build an extraordinary company... one of the greatest American leaders in history.

I’m truly saddened to learn of Steve Jobs’ death. Melinda and I extend our sincere condolences to his family and friends, and to everyone Steve has touched through his work. Steve and I first met nearly 30 years ago, and have been colleagues, competitors and friends over the course of more than half our lives. The world rarely sees someone who has had the profound impact Steve has had, the effects of which will be felt for many generations to come. For those of us lucky enough to get to work with him, it’s been an insanely great honor. I will miss Steve immensely.

Steve, thank you for being a mentor and a friend. Thanks for showing that what you build can change the world. I will miss you.

Steve Jobs was a great friend as well as a trusted advisor. His legacy will extend far beyond the products he created or the businesses he built. It will be the millions of people he inspired, the lives he changed, and the culture he defined. Steve was such an "original," with a thoroughly creative, imaginative mind that defined an era. Despite all he accomplished, it feels like he was just getting started. With his passing the world has lost a rare original, Disney has lost a member of our family, and I have lost a great friend. Our thoughts and prayers are with his wife Laurene and his children during this difficult time.

Today the world lost a visionary leader, the technology industry lost an iconic legend and I lost a friend and fellow founder. The legacy of Steve Jobs will be remembered for generations to come. My thoughts and prayers go out to his family and to the Apple team.

Today, we lost one of the most influential thinkers, creators and entrepreneurs of all time. Steve Jobs was simply the greatest CEO of his generation. While I am deeply saddened by his passing, I’m reminded of the stunning impact he had in revolutionizing the way people consume media and entertainment. My heart goes out to his family and to everyone who had the opportunity to work beside him in bringing his many visions to life.

Also, don't forget to look up to the very top of our website - I assure you, every word is true. Journalists from around the Web have been publishing obituaries. First, there's John Markoff's obituary from The New York Times. There's also a piece in Time written by Harry McCracken, and another article that appeared in Wired. Walt Mossberg, of All Things Digital, has also written a piece on his relationship with Steve Jobs. Also, if you remember that lost iPhone 4 prototype (which Gizmodo got its paws on), you may be interested in reading Brian Lam's account of the escapade, and his dealings with Steve Jobs before, throughout and after the lost-iPhone 4-gate. Jesus Diaz of Gizmodo also put together a nice "Think Different" video, which is dedicated to Steve. Furthermore, our friend Alex Heath published a piece for Cult of Mac yesterday regarding a reserved seat at the iPhone event, right at the very front of Apple's Town Hall auditorium. It's assumed that the reserved seat was for Steve Jobs. John Gruber of Daring Fireball talks about Steve's grass-stained trainers, which he wore to his last keynote, and how he believes they are evidence of limited time acknowledged. Also, be sure to read through the transcript of this super-interesting interview with Steve Jobs, which took place back when he was with NeXT Computer. In the interview, he talks about his childhood and about the upcoming release of a little computer animated picture called "Toy Story." There have also been a variety of tributes made in Apple Stores across the world (and even at Apple's HQ, in Cupertino), and several images and videos of Steve Jobs have also been circulating online. In particular, Apple's Fifth Avenue Apple Store has become a memorial site for Steve Jobs, as Apple Insider notes. [Thanks to MacRumors] 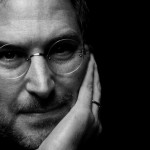 Reactions To Steve Jobs' Passing Circulate Online
Nothing found :(
Try something else