You are using an outdated browser. Please upgrade your browser to improve your experience.
by Joe White
November 26, 2011
Type2Phone is a new Mac app that allows users to type out text on a Mac computer and have it appear on an iPhone handset instantly, via Bluetooth. The application, which I've been playing around with for the last half hour, works incredibly well and is something Apple fans will undoubtedly appreciate. Currently, the application is available to download in the Mac App Store for $4.99. Once downloaded, users launch the app, pair their iPhone with their Mac computer (which should, literally, take mere seconds) and, once paired, you should be good to go: text that you type out in Text2Phone will appear, instantly, on your iPhone's screen in the Messages app, or within whatever other app you wish to type text within. The great thing with Type2Phone is that it doesn't require a jailbroken handset, but, unfortunately for Windows fans, this app is Mac only. Furthermore, the application doesn't display incoming text (SMS messages, emails, etc.) from within the app, meaning you're going to need your iPhone nearby - docked, or just by your side - when using Type2Phone. But it is much easier than typing out messages - especially long messages - on an iPhone using its virtual keyboard. Take a look at Text2Phone now in the Mac App Store. As mentioned, it's available to download for $4.99. If you're a fan of this app (or, if you've come across a handy alternative you wish to share with us) be sure to leave a comment below. [via TUAW] 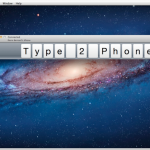 Type2Phone - Type Out Text For Your iPhone On A Mac

Type2Phone - Type Out Text For Your iPhone On A Mac
Nothing found :(
Try something else