You are using an outdated browser. Please upgrade your browser to improve your experience.
by Joe White
December 31, 2011
A team of iOS hackers (including Steve Troughton-Smith, @stroughtonsmith, and @TheMudKip) has managed to get numerous iOS applications and even the iOS SpringBoard to run on a second generation Apple TV. Since the original launch of the Apple TV, one of its major criticisms has been the set-top box's lack of support for third-party applications. Though it is possible to run plugins on the Apple TV and even stream an application from an iOS device to one's TV screen (via AirPlay Mirroring), neither are quite the same as having full-blown third-party applications, as one does with the iPhone, iPad and iPod touch. However, a team of iOS hackers has managed to gift iOS apps to the Apple TV in a roundabout way. In the below video, a jailbroken Apple TV (2G) device runs a number of applications, including the built-in iOS Calculator app and a puzzle game. It is possible, then, with a lot of hacking to port iOS apps to the Apple TV. Though whether this hack can be developed enough to justify a public release remains to be seen. Below, we've embedded the aforementioned video. Take a look at it, and feel free to share your thoughts in the comments. [via iDownloadBlog] 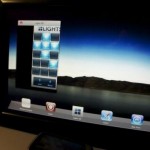 Hackers Manage To Port iOS Applications To The Apple TV

Hackers Manage To Port iOS Applications To The Apple TV
Nothing found :(
Try something else