You are using an outdated browser. Please upgrade your browser to improve your experience.
by A.T. Faust III
December 20, 2011
The Wall Street Journal has a newly published story on Apple's oft-rumored plans to introduce an all-in-one television set sometime between 2012 and 2013. And, though the most recent writeup is relatively light on any heretofore unknown information, it's been revisited largely due to the fact that top Apple brass have, in the past few weeks, "discussed their vision for the future of TV with media executives at several large companies." Naturally, those large companies remain nameless, but the update is indicative that Apple is actively pursuing a place in the future of television. Almost certainly, most of these discussions are rights-based, as Apple looks to modernize the aging TV delivery model without alienating content holders or casting doubt over the financial security of the industry's $150 billion business. Still, according to the WSJ report, exactly

[w]hat kind of cooperation Apple is seeking from media companies remains unclear. Over the years, Apple has had mixed success getting television companies to agree to new business arrangements for its iTunes store.

But we already knew all that. From iTunes to movie rentals to iCloud to iTunes Match, securing the rights to give these services life has always been the primary hurdle for Apple in its aggressive march forward. There's going to be weeks and months of hard-nosed posturing and hard-line negotiations, until, ultimately, agreements are made and media is (again) revolutionized. And, looking back, these biggest obstacles will seem little more than mere minutia. Afterthoughts. Expected outcomes. Historical footnotes. Because that stuff's boring. No, when we think about Apple, what still interests us over anything else is hardware. And that means, in this case, all the renewed talk of that mythical Apple TV set. The WSJ says the device's commercial unveiling--never mind its mere R&D existence--is nothing short of a foregone conclusion. Heck, iTunes creator Jeff Robbin and Apple Senior VP Eddy Cue are reportedly leading the project! A bit of background hammers the point home:

[Steve] Jobs envisioned building a TV that would be controlled by Apple's mobile devices in order to be easier to use and more personalized... The company has worked on prototypes for years. Before his death in October, Mr. Jobs told biographer Walter Isaacson that he had "finally cracked it," according to Mr. Isaacson's book. The TV device Apple is working on would use a version of Apple's wireless-streaming technology AirPlay to allow users to control it from iPhones and iPads... When the company plans to start selling such a device and whether it would receive traditional broadcast or cable signals remains unclear... The technology could allow users to stream video from mobile devices to their televisions, without a set-top box.

Of course, that same technology could allow users to stream video from mobile devices to their televisions with a set-top box, too. And Apple already has one in its Apple TV product. Technologically, there's no reason such improvements--including Siri voice control and iCloud-based DVR capabilities (which are both also mentioned in the WSJ report)--couldn't be folded into the existing platform. The Apple TV's specs are beefy enough to support the features, and its near-term A5 processor update would make it even more capable. It pains me to say it, but, taking the WSJ article at face value, there's not a single compelling reason why Apple needs to introduce a dedicated television set to its iOS lineup. Consider this anecdote:

Last year, at its "top 100" meeting for senior managers in Carmel, Calif., an attendee asked Mr. Jobs whether Apple was developing a television. He responded that it would be a bad business to get into, noting that the margins on television are far lower than the margins Apple makes from its other devices and that consumers don't buy new televisions very frequently, according to this person.

Perhaps so. Lost in the discussion, however, are the reasons why a dedicated TV set would make sense for Apple. We've already discussed how a voice-powered channel guide and navigator will be the future for TV control, but to justify the actual hardware of a whole television, it's necessary to address the user experience flaws inherent in the current average entertainment system. Additionally, these flaws must exist beyond a simple set-top box' ability to solve them. The biggest problem I can personally identify (and with which I personally identify) is that of input selection. See, my parents, well, they're not particularly tech savvy. If one of them should accidentally change input sources on the TV set, I'll get a call. Sometimes, I won't be able to fix the issue over the phone, and an untimely physical visit is the only option. Even with detailed instructions taped to the underside of the remote control, the problem persists. All this irritation, just from an errant button press. Never mind if, vacuuming, Mom pulls out a cable or two! But the problem runs deeper than that. My parents' inability to operate their television's source and features settings effectively prevents them from using DVR services, Netflix, DVD/Blu-Ray players, or anything else. All they know how to do is access live TV programming, and that just barely. Nearly every young person I've talked to is in the same boat. Like DJ Jazzy Jeff & The Fresh Prince said, "Parents just don't understand." And there are plenty of kids and teens who don't understand, either. So, a television set with Siri-controlled input switching would solve that giant problem. Sure, Apple could extend the current Apple TV box into a programmable HDMI/coax switch, but then you're talking about a much more expensive proposition than the current device's $99 entry fee. Aside from allaying the aforesaid input confusion, there are many other solutions a dedicated set would offer beyond the capabilities of any set-top Apple TV alternative. The unit would completely integrate DVR software (with its requisite hard drive space), as well as feature a slot-loading optical drive for DVD and Blu-Ray playback. That kills two peripherals right there. Still, the goal is to kill all peripherals, so I'd expect any Apple set to also integrate fully-licensed cable and satellite receivers for all major markets. In fact, that last bit would be the major, industry-unifying breakthrough that's been sorely lacking all these years. If Apple can pull this off, one standalone TV would handle the collective duties of all major market entertainment add-ons while dramatically increasing service participation among the hundreds of millions of users worldwide. In fact, the only remaining peripheral would be the video game console. Unfortunately, those don't--and, realistically, can't--mesh with Apple's vision of the living room's future. So, instead of having three or four individual devices hooked up to your old flatscreen, you could get everything you're used to out of no more than two. (Three if you're an audiophile and Apple makes no concessions to provide an inbuilt, powered platform for your current speaker setup.) Add an HD FaceTime camera, a special version of the Safari browser, and app support, and Apple would have an elegant product literally anyone could use. To its full potential! Plus, who wouldn't want a TV designed by Jony Ive? I know my home could use more art on the wall. [Image: 9to5Mac.com. And, no, we don't think it'll have glasses-free 3D, a multitouch interface, or be called iTV. "Apple HDTV," maybe?] 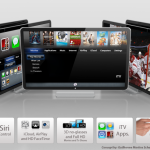 Old Rumors And New Ideas Fuel Round Two Of Apple TV Set Speculation
Nothing found :(
Try something else