You are using an outdated browser. Please upgrade your browser to improve your experience.
by A.T. Faust III
December 29, 2011
It'll be 2012 in a few short days, and the possibilities going forward are virtually limitless. We've got our traditional resolutions to meet in the new year, and, like most people on the planet, we allay our expectations with a(n oxy)moronic mix of happy optimism and careful trepidation. We take it all seriously, but we take it easy, too. Unfortunately, the same can't be said for the consumer tech sector, neither in the industry's established pacing and behavior, nor in our collective view of its complex, restless machinations. We expect rapid, meaningful change at every turn. And, in the last half decade, we've gotten it. More than that, this progress has been spearheaded largely by a single man and a single brand: the late Steve Jobs and his Apple Inc. From iPod to iPhone to iPad, Apple's products have simultaneously defined new consumer markets and redefined universal methods of electronic communication and functional interaction. Consider: Today, the recording industry measures its success in digital downloads instead of CD sales. Where cell phones were once bulky clamshells with low-res cameras and crummy QWERTY thumbpads, sophisticated touchscreen operating systems with near universal data compatibility are now the norm. And bulky tablets--once relegated to doctors and deliverymen--have slimmed down into lightweight, convenient, capable replacements for the faltering laptop and desktop environment. That's a whole lot of change in a tiny bit of time. And it's wholly unsustainable. We have now, perhaps more than anytime else since 2007, very little to look forward to in the personal applications of the mobile technology realm. Sure, there'll be a few surprises here and there, but we won't see another truly revolutionary piece of hardware for some long while. Naturally, if you're prone to excitement over small component advances and the march of Moore's Law, you'll be thrilled as ever (at least, in the short term). However, if you're expecting heretofore unintroduced fundamental physical change, you've got another thing coming. That is, you haven't got anything coming. No, the next several years will likely mirror the late nineties and early aughts, where we saw great change in hardware substance but no change at all in hardware style. We've used desktops for ages, and LCD flat panels long ago displaced yesterday's heavy CRTs. Stuff gets smaller and faster, but towers and keyboards and mice and carpal tunnel braces still stick around. But they're gathering more dust than usual, and, as these old signs of the times are slowly phased out, we're more and more clearly bound for a smartphone- and tablet-heavy median future. Look, I realize I'm setting myself up for a retrospective beatdown. In fact, the gadget-loving, sci-fi-writing idiot in me hopes the black and blue comes hard and heavy. But my reasoning is based on a series of definable, factual trends and common-sense assumptions. And remember, I'm talking strictly about hardware, here. And hardware paradigms are inherently difficult to change (which is, undoubtedly, part of what makes Apple's elegant iOS lineup so overwhelmingly popular and successful). Software is another matter, as platforms and services historically evolve unimpeded, unaffected by the constraints of space. Yes, the television industry will see a drastic shakeup, as will motion pictures and the notions of ownership and expensive, one-shot entertainment buys. As 100 Mbps wired connections become more of an (altogether overdue) American and international reality, we'll be pulling data into our homes faster than any next-generation 4G service can ride the airwaves. Don't believe me? Ask him, Cringely--He'll set you straight:

Eighteen months from now many American homes will be where Japanese and Korean homes have been for sometime, sucking 100 megabits or more from the Internet. LTE can’t do that now or then and it can’t do half of that for a tenth or even a hundredth of the customer base of wired Internet.

But, once in our homes, that wired internet will be wirelessly routed to our mobiles and tablets the same way they already are, making iPhones and iPads all the more useful--and all the more used. The data dam's coming down to flood our needs like never before, but traditional PCs, Macs, notebooks, and netbooks will sink all the same. Smartphones and tablets will survive. But their outward alterations are nearly complete. After all, nature halts drastic evolution when a given species separates itself from significant predation. The situation facing today's iPhone and iPad is largely the same. Direct competitors will compete, but there are no viable competing technologies anywhere in sight. Why not? As I've written some several times before, pieces of kit like the iPhone and iPad are, ergonomically, fast approaching the very real point of diminishing returns. Nowhere are these physical limits more apparent than in the design jump from the first-gen iPad to the iPad 2. While the former was certainly slim enough, the latter is almost impossibly thin. Shaving anything more than a few millimeters of thickness off its aluminum housing would render the product too sharp, awkward, and uncomfortable to use. Imagine an iPad-sized iPod touch 5G, and you'll see what I mean. Ouch! Similarly, the squared-off iPhone 4/4S is expected to lose just a sliver of width in its long-anticipated iPhone 5 redesign. Add to that its expected return to a general 2G/3G/3GS shape (one that, based on mockups leaked before the 4S launch, indicate a distinct iPad 2-type outward geometry), and it's easy to see that, for all intents and purposes, the look and feel of the iDevice line has almost nowhere else to go. Folding OLED screens, rolled-up newspaper-like displays, wearable computers, HUD-based glasses and contact lenses--These are mass-production pipe dreams. While prototypes do exist (as prototypes always do), their functional quality is extremely substandard, and cost-effective manufacturing's not even on the horizon. Wide-angle glasses-free 3D is a more reasonable tablet or smartphone addition, but that's all it can ever be: an addition. There isn't a single compelling idea in published R&D about any viable change or revision of how modern mobiles should look or behave. Improvements, then, will be internal--but even those for just a time. Silicon fabrication processes are approaching their limits, and battery technologies have been stagnant for several years. ARM's division GM Simon Segars had this to say:

Silicon scaling will end at some point, and I think it's coming sooner than many people think... [Y]ou can only scale so far before we need other materials like III-V semiconductors... You need to produce 200-300 wafers an hour, and today's EUV (ultraviolet lithography) machines can do about five wafers per hour now. Some people question whether it ever will be mainstream--lots of R&D still needs to go into it.

As for those aforementioned battery hurdles, Segar tells us that charge capacity and overall utility are increasing at a clip of around 11 percent per year. And, he says, just keeping progress at that level "will require some exotic materials such as silicon alloys or carbon nanotubes." Batteries, Segar laments, "are really rubbish." Taking the mobile platform--CPU speed and component power management--as a whole, Segar sums up the whole of my own verbose arguments simply:

Although we have made fantastic progress there are a few issues ahead and the future won't be like the past.

So, with all these barriers against significantly smaller, thinner, lighter devices and the realization that a framed color screen is as close to Star Trek as we're going to get (for now), what is there to look forward to? With our recently spoiled expectations, not a whole lot. I'm often accused of writing with tinges of bias, of being an Apple "fanboy" (I am) or being on Apple's payroll (I wish!), so I've got a great deal of confidence in what the engineers and designers in Cupertino can bring to market, despite my view of the gadget wasteland ahead. But I expect any forthcoming innovation to enhance the lineup we've already got rather than rewrite history books yet again. (Even the rumored Apple HDTV--which will presumably serve to alter television's content distribution model, aggregating and simplifying already-existing services--won't change the fact that future users will still sit on the couch and watch a big screen on the wall.) In a few years, the iPad will be the world's bestselling computer, and number five will look an awful lot like number two, albeit with a sharper screen, beefier guts, bigger battery, and longer runtime. Your newest iPhone will still sport a 3.5- or 4-inch display, and you'll still be visiting iTunes and the App Store and iBooks on the regular. Wearable gadgets might be popular, but they'll piggyback the tablets and smartphones that make up your collective connected arsenal. The smartphone is the new landline, the tablet is the new PC, and mobile is the new household. For lots of us, that's already the case, and tomorrow will be a lot like today. 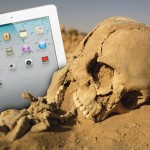 The Era Of Hardware Revolution Has Come And Gone

The Era Of Hardware Revolution Has Come And Gone
Nothing found :(
Try something else