You are using an outdated browser. Please upgrade your browser to improve your experience.
by Joe White
January 31, 2012
Apple has launched a new iPhone 4S reservation system in its Chinese Apple Online Store, in an attempt to stop "scalpers" queuing for handsets and setting them on at an inflated price. The system allows fans to reserve a handset between nine a.m. and 12 p.m. daily, and involves filling out an online form that requires the customer's full details (to pick up the iPhone, customers will also need a government-issued photo ID). Apple then contacts successful customers before nine p.m. the same day, providing them with information regarding their reservation. Here's how Apple puts it:

In China, and specifically at Apple's Beijing retail store, huge queues punctuated with scalpers meant the initial launch of the iPhone 4S descended into chaos. Now, it would appear that Apple is desperate to avoid a repeat situation: handsets are no longer being sold in Apple Stores, with customers having to use the aforementioned reservation system. The system also means everybody has a chance at reserving an iPhone 4S handset, and that professional scalpers aren't going to buy-up the day's stock before anyone else can get themselves an iPhone. Here's the iPhone 4S reservation webpage. It's a great idea, if you ask me. I just wonder if Apple has plans to launch this worldwide, or if it's only going to be used for emergency launches. Let us know your thoughts on the reservation system in the comments. [via 9to5Mac] 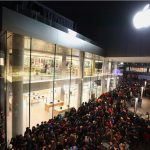 Apple Targets Scalpers With New iPhone 4S Lottery System In China
Nothing found :(
Try something else