You are using an outdated browser. Please upgrade your browser to improve your experience.
by Sean Capelle
January 22, 2012
Apple's recent special event revealed the changes they plan to make in the world of publishing. Not only was iBooks 2 meant to open the door for textbook sales, but the Mac companion app, iBooks Author, could also make the textbooks. Better yet, both apps are free. While iBooks 2 is innocent enough, Author is more than it appears on the surface. How could writers not like the pitch? Create your own e-books in a sleek, easy-to-use app (similar to the iWork suite), and put them into iBooks. You can add galleries, widgets, and other media to enhance your e-book. But as PCMag's Sascha Segan points out, doing so is a "devil's bargain." Hidden within iBooks Author’s about section is the license agreement, and the very first part of it references Apple’s intentions: "IMPORTANT NOTE: If you charge a fee for any book or other work you generate using this software (a “Work”), you may only sell or distribute such Work through Apple (e.g., through the iBookstore) and such distribution will be subject to a separate agreement with Apple." The legalese explains it too, but at least Apple was nice enough to put it into layman’s terms. What are the implications of this? Essentially, Apple is asking its users to help add content to iBooks. Not only that, but they will take a cut every time you sell the e-book (your “Work”). And not only that, but even if you wanted to port your work elsewhere, you can’t. As Segan writes, “Apple owns the creative process of anyone who uses [Author].” You don’t have to download Author, and you don’t have to sell your work in the iBooks Store. But has Apple gone too far, or are they acting fairly? ***Update: As some of you pointed out,  Apple effectively owns the packaging of the iBook, and not the actual content. 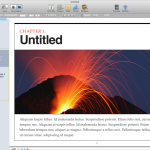 Apple Will Own Your Work With iBooks Author

Apple Will Own Your Work With iBooks Author
Nothing found :(
Try something else