You are using an outdated browser. Please upgrade your browser to improve your experience.
by Joe White
January 10, 2012
Apple's recently released iOS 5 beta 3 might add the 3G toggle to iPhone 4S handsets, but that's not the only surprise hiding within the new firmware file. In a report first published by 9to5Mac, it is revealed that iOS 5.1 beta 3 makes explicit references to Siri Dictation, suggesting that Apple's "humble personal assistant" might soon be available on its 9.7-inch tablet. The reference appears in the Keyboard section of the Settings app, where a tab labeled "About Dictation and Privacy" is available to open. As you can see in the above image, this tab contains legal information relating to Siri Dictation - a feature that is currently only available on Apple's iPhone 4S handset. Though many have speculated that Siri might eventually launch on the iPad (most likely with the iPad 3, we would guess), this reference seems to acknowledge our previous speculation. Interestingly, the iPhone 4S's Settings app does not include a tab marked "About Dictation and Privacy," leading us to believe that the section on the iPad might not simply be cross-over code. As always, we'll keep you posted. 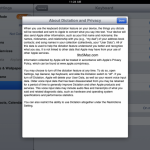 Apple's iOS 5 Beta 3 Makes Reference To Siri Dictation For iPad
Nothing found :(
Try something else