You are using an outdated browser. Please upgrade your browser to improve your experience.
by A.T. Faust III
January 16, 2012
I don't really see the logic behind this particular trend, but there's no denying it's picking up steam. Now more than ever, if you're in the market for converting your very portable iPhone into a handset that's not, you've got options. We've already covered one example of the fad at this year's CES, but there are lots more to choose from. And, with five such add-ons on display, accessory-maker Native Union is leading the way. Want to keep things colorfully retro and line-in simple? Try out the POP Handset in one of 13 shiny, candy-shell colors. It's little more than an audio reroute hooked up to your headphones jack, but it promises to largely eliminate in-call radiation, and that's a good thing. Prices start at $29.50. If you're using your phone in a small home or home-office environment -- and if you also use a computer or tablet -- you might be interested in the $59.99 MM02T, instead. The Native Union press release explains:

The MM02T...features two different lines mounted on a retractable system that always allows you to keep your workspace clean. Users can easily toggle between devices using the central line switch button and mount up to two devices in the universal holder. The handset can also be used without the base and plugged directly to the mobile phone. ... It can be fitted with a USB adaptor or a Splitter cable for use with Skype or any other VOIP software on your computer.

If work's not an issue, and you don't want to be tethered to a desk all day, consider the MM03. With Bluetooth connectivity and a weighted base, you can leave your phone at bay while you roam, chattering, within a 30-foot radius. Again, the biggest selling point here is radiation reduction. That, and style. $130 of it. Tired of handsets altogether? Try the honey-comb-patterned MM04i. This thing's little more than a pretty pair of speakers with conference-call capabilities thrown in. It charges your iPhone while Bluetooth handles the audio, and it'll run you almost $200. Saving the best for last, Native Union has unveiled its smartly-designed and smartly-priced ($39.99) travel alternative, the MM05T. Yeah, using a portable handset with your portable handset might seem redundant, but the thing works with all your other devices, too. And it comes in just one color: a subdued, rubberized, soft-touch, matte black. Very professional! Anyone interested? [gallery link="file" order="DESC"] 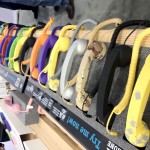