You are using an outdated browser. Please upgrade your browser to improve your experience.
by Joe White
January 2, 2012
SwitcherLyrics ($0.99) is a new jailbreak tweak that allows Apple fans to view the lyrics of a playing song within the app switcher. Though a number of third party iOS applications allow users to view the lyrics to their favorite songs, SwitcherLyrics allows users to view these lyrics from within the app switcher (also known as the multitasking tray). Here, lyrics are displayed rather elegantly, considering the shortage of space. However, the jailbreak tweak isn't all good news. As Redmond Pie notes, if SwitcherLyrics fails to recognize a song and is unable to pull lyrics from its database, the jailbreak tweak freezes and crashes, forcing users to perform a soft reset in order to regain control of their iOS device. While some of you might not encounter this issue (often), our readers who have a more "alternative," non-mainstream taste in music might find this issue to be something of a burden. Especially when one considers that the jailbreak tweak itself costs $0.99. If you're willing to overlook this problem and take SwitcherLyrics for a spin, you can find it in the Cydia Store (where it's available for $0.99). Let us know your thoughts on the tweak in the comments. 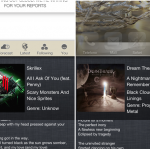 Jailbreak Only: SwitcherLyrics - Display Music Lyrics In The App Switcher

Jailbreak Only: SwitcherLyrics - Display Music Lyrics In The App Switcher
Nothing found :(
Try something else