You are using an outdated browser. Please upgrade your browser to improve your experience.
by Joe White
January 7, 2012
A new report claims that Apple is planning on launching Apple Stores within a number of Target locations. The news comes from Apple Insider, who cites information provided by "a source familiar with Apple's plans." As outlined in the original article:

According to a source familiar with Apple's plans, the company plans to begin operating Apple-branded areas within 25 larger Target stores in locations which can't support a standalone Apple Store. The initial opening would be a small start, given that Target, the second-largest discount retail chain in the US, operates 1752 stores in the US. Apple has opened 359 of its own retail stores globally, 245 of which are in the US.

Already, this "store-within-a-store" system is in place at around 600 Best Buy locations. These "Apple Shops," which sell numerous products, feature staffing by Apple Solution Consultants, Apple Insider notes. Though iOS devices are already available at Target stores, this move could see Apple's full product range appear at select stores in the near future. We'll keep you posted. 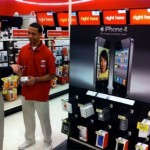 New Rumor Claims Apple Plans To Open "Stores" Inside Target
Nothing found :(
Try something else