You are using an outdated browser. Please upgrade your browser to improve your experience.
by A.T. Faust III
January 31, 2012
Apple's iDevices are not 3D-capable -- They neither record nor display 3D content. Somehow, though, that hasn't stopped many of the app world's industrious developers from creating kitschy mobile software to simulate the effect. One new release, VideoCam3D, has made a gallant effort at pulling off the trick. Developed by NXP Software (of CineXPlayer fame), the app is simple and to-the-point. All you do is launch it, select or record your clip, and kick off the conversion process. Unfortunately, the conversion takes some time to complete, and the end-result (presented in your choice of red/blue anaglyph or side-by-side stereogram) is underwhelming. Of course, that's to be expected: You simply can't produce a 3D image without a two-lens camera system. Instead of creating images with actual elemental depth, you get a sort of sunken presentation, where the video looks wholly recessed but still altogether flattened. If you're familiar with either the cross-eyed or "disfocus" method, you can check out some glasses-free samples I made with the app (from a November trip to Ithaca, New York) in the gallery below. More than anything, the app's a noble effort at an impossible task. If you're still interested, you can pick up VideoCam3D for $1.99 on the App Store, though a free version is also available to try. [gallery link="file" order="DESC"] 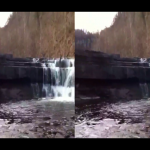 "VideoCam3D": Three dimensions From A 2D Camera?
Nothing found :(
Try something else