You are using an outdated browser. Please upgrade your browser to improve your experience.
by Joe White
January 14, 2012
WhatsApp Messenger is no longer available to download in the iOS App Store. The application, which allowed users to send free instant messages to other smart phones, was one of our favorite IM apps for the iPhone. Besides supporting instant messages, WhatsApp also allowed users to send images, video and sound files, and was available for Android, BlackBerry OS and Nokia handsets (as well as the iPhone). Now, clicking on WhatsApp Messenger's iTunes URL produces a pop-up message, which states that the application is no longer available in the App Store. Currently, it is not yet known whether the application's developer removed the app, or if Apple removed it for some unknown reason. Though Apple did launch its own iOS-to-iOS instant messaging service in iOS 5 (iMessages), we can't see the company removing each and every IM application from the App Store as a result. If you have any information (or theories of your own), feel free to post them in the comments. UPDATE Thanks to a couple of our readers who left comments below (giulianosetzi and juanmateo), we have learned more about why WhatsApp was removed from the App Store. In a Twitter update posted from the @WhatsApp Twitter account, the developer explains:

Sorry, WhatsApp is temporarily unavailable on iTunes. We submitted a new version and are awaiting approval and publication by Apple — WhatsApp Inc. (@WhatsApp) January 13, 2012

This is due, we understand, to security risks similar to those cited by The Verge recently. As the app's developer notes, a new version should be available soon - we'll keep you posted. SECOND UPDATE I've just received an email from WhatsApp: apparently, the reason for the app's removal has nothing to do with the aforementioned security issue. The company "can't comment on the issue further," but wishes to "avoid having incorrect information" circulating online. Take from that what you will. 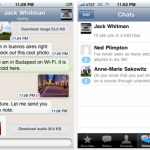 WhatsApp Messenger Disappears From The App Store [Updated]
Nothing found :(
Try something else