You are using an outdated browser. Please upgrade your browser to improve your experience.
by Brent Dirks
February 20, 2012
Thanks to special access granted by Apple, ABC's "Nightline" will air a special report Tuesday night featuring behind-the-scenes access to the Foxconn manufacturing plants in Shenzhen and Chengdu, China. For promotion of the report, ABC released a short video, seen below, from "iFactory: An Unprecedented Look Inside Apple's Chinese Core." Bill Weir announces that "Nightline" will show viewers how the iPad, iPhone and MacBook are made and some of the people who make them:

"We'll show you how these folks come on buses, sometimes for days, to travel to the Foxconn gates, desperate for a chance to wipe a screen or solder a chip for 10 hours a day at less than $1.50 an hour," Weir says in the video.

In a "Reporter's Notebook" feature posted today on the ABC News website, Weir says Apple promised complete access, with no dog-and-pony show for the cameras. But the anchor also says repeated requests for interviews with Apple CEO Tim Cook and senior vice president of industrial design, Jonny Ive, were denied. Weir also offers a surprising admission from a former Apple and current Foxconn executive, who said that the "Nightline" cameras probably wouldn't be at the plants if the well-publicized suicides and explosions didn't happen:

"You being here is part of the openness, part of the learning, part of the change that Foxconn is undergoing," said Louis Woo, a former Apple executive who serves as an advisor to Foxconn CEO, Terry Gou. "Of course you can argue that we should have opened up five years ago. Well five years ago, we are under the radar screen, nobody really knows us, we are doing well. Why should I open it up?"

ABC released a slideshow of images from the Foxconn factories, which also makes products for electronics titans like Sony, Dell, Hewlett-Packard, IBM, Motorola and Toshiba. The entire report will air at 11:35 ET/PT tomorrow on ABC. The report comes on the heels of a request by Apple for inspections of Foxconn factories by the non-profit Fair Labor Association. The FLA head recently called the Foxconn factories better than other manufacturing plants in China. Foxconn also recently announced that some of its China-based workforce will be getting a raise. What do you think about the report? Will you be watching on Tuesday night to see exactly where and who makes your favorite Apple gadget?

If you can't see the video above, please click here. (Image via ABC) 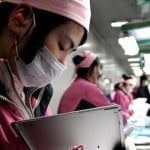 ABC’s ‘Nightline’ Offers Look Into Apple’s Foxconn Factories
Nothing found :(
Try something else