You are using an outdated browser. Please upgrade your browser to improve your experience.
by Bryan M. Wolfe
February 22, 2012
Last night, “Nightline,” the venerable ABC News magazine, aired what it calls a behind-the-scenes report on working conditions at one Apple supplier factory. Specifically, the series looked at conditions at the controversial Foxconn plant in Shenzhen, China where a number of employees committed suicide going back to 2009. It is also here where most of the world’s most popular Apple products are made including the iPhone/iPod touch and iPad. A new report suggests, however, that what ABC viewers saw last night wasn't so much real-life, but instead an altered reality where working conditions are improving and people are mostly happy. First announced earlier this week, the exclusive "iFactory: An Unprecedented Look Inside Apple’s Chinese Core,” was hosted by anchor Bill Weir and provided a close-up view of one of the most controversial and largest manufacturing companies in the world today. Taipai-based Foxconn provides factory parts for some of the world's most important technology companies. In addition to Apple, Foxconn provides materials for Sony, Dell, Hewlett-Packard, IBM, Motorola and Toshiba.

"For years, Apple and Foxconn have been synonymous with monster profits and total secrecy so it was fascinating to wander the iphone and iPod production lines, meet the people who build them and see how they live. Our cameras were rolling when thousands of hopeful applicants rushed the Foxconn gates and I spoke with dozens of line workers and a top executive about everything from hours and pay to the controversies over suicides at the plant and the infamous "jumper nets" that line the factories in Shenzhen. After this trip, I'll never see an Apple product the same way again" said Weir.

The 18-minute report does offer a number of facts some may find interesting.  For example, it may surprise many to know that it takes five days to assemble an iPad, and that most Foxconn employees have never actually used Apple’s popular tablet. Essentially, however, there isn’t much new here. For example, most of the Foxconn employees Weir spoke to simply complained of long hours and low pay. Any discussion of the so-called suicide “jumper nets” was general at best. Also missing was any proof that the company employs minors, as long as been rumored. According to Weir, the youngest workers were 17 or 18 with no one looking older than 30. Most made as little as $2 per day during a 12-hour shift. A report this morning suggests that what viewers saw last night might not have been entirely accurate. AppleInsider, which doesn’t specifically mention the ABC News piece, reports that Foxconn hid its use of underage employees during a recent inspection by the Fair Labor Association that Apple highlighted on its website. This allegation, which arrived via the Students & Scholars Against Corporate Misbehavior (SACOM) organization, claims that Foxconn hid underage employees from officials.

"All underage workers, between 16-17 years old, were not assigned any overtime work and some of them were even sent to other departments," claims SACOM’s project officer Debby Sze WanChan.

ABC News received full access to the plant in Shenzhen, China, apparently with Apple’s full approval. However, Weir said that repeated requests for interviews with Apple CEO Tim Cook and senior vice president of industrial design, Jonny Ive, were denied. Plus, it should be noted that ABC, through its corporate parent, Walt Disney, has strong ties to Apple. Its President and CEO, Robert A. Iger, for example, sits on the Apple board, while the Steve Jobs Trust is the entertainment giant’s largest individual shareholder. Here's the report:

Real or whitewash, the ABC report is nonetheless worth watching. If you cannot see it here, please click this link. 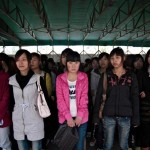 ABC’s Visit To Apple Factory: Real Or Make Believe?
Nothing found :(
Try something else