You are using an outdated browser. Please upgrade your browser to improve your experience.
by A.T. Faust III
February 7, 2012
In the wake of all that Temple Jump unpleasantness and general emphasis on App Store scammery, Apple's issued a notice to developers warning them about the perils of shady marketing. In it, Apple discusses the risks involved for developers employing agencies that "advertise or guarantee top placement in App Store charts." While many legitimate marketing firms obviously exist, it's impossible for anyone to guarantee such positive outcomes unless they're actually rigging the vote. Here's how it works: A dev pays some smarmy goober a few thousand dollars, and said goober proceeds to unleash an army of bots to repeatedly download and rate the app in question. This bumps the app all the way up the charts overnight, and people get tricked into thinking some odious pile of garbage has merit. It's risky business, though: Once Apple finds out you've cheated (knowingly or not), they're likely to remove all your apps and ban you to boot. In Apple's latest App Store crackdown (surely catalyzed in part by this Touch Arcade thread), TUAW reports that a whopping eight titles in the top 25 -- 31 percent! -- were removed for exactly this sort of violation. (Keep in mind, this massive volume is a definite aberration to the normal state of App Store affairs, but such fraud is nevertheless a periodic problem.) Hopefully, Apple will get everything under control. If only they paid this much attention to their approvals process... 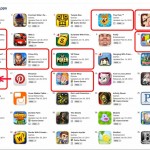 Apple Issues Statement, Warns Devs About "Gaming The System"
Nothing found :(
Try something else