You are using an outdated browser. Please upgrade your browser to improve your experience.
by A.T. Faust III
February 20, 2012
A breaking DigiTimes report claims Amazon is actively retooling its tablet approach after apparent lower-than-expected sales of its original Kindle Fire, cutting production in half while shifting attention to the smaller slate's 10-inch sibling. Indeed, Foxconn has been contracted to carry out manufactory duties for the larger latter, while the ODM for the original Fire, Quanta Computer, will continue limited production of last year's release. However, in a separate but related report, DigiTimes shares a more interesting bit of information: Amazon's Kindle Touch is getting a color e-ink refresh! E Ink Holdings is expected to begin shipments in March, and, unlike Amazon's cooling Fire sales, these color e-readers are expected to move over three million units per month come release. Though it's becoming more and more clear that Amazon can't put a dent in Apple's dominance of the tablet market, it's certainly encouraging that the retail giant is still trying and has a proven and profitable plan B. [Image: androidcommunity.com] 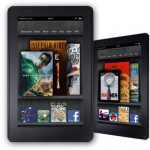 Foxconn To Manufacture 10-Inch Kindle Fire As Amazon Limits 7-Inch Production
Nothing found :(
Try something else