You are using an outdated browser. Please upgrade your browser to improve your experience.
by A.T. Faust III
January 25, 2012
Ever since the Kindle Fire launched last year, we've been of the opinion that Amazon's budget "tablet" wouldn't be a speed bump on Apple's highway to mobile marketshare. Even as some analysts were confused and misled by Christmastime sales figures, we saw the truth. And Tim Cook saw it, too. In Tuesday's quarterly earnings call, the Apple CEO went on record as saying he could see no evidence from week-to-week sales that the Fire had any adverse effect on the number of iPads sold or their overall rate of US adoption. While the Fire's impact on iPad hasn't been scientifically or comprehensively dissected to date (and can't begin to be until Amazon starts releasing actual sales figures), it's clear that Apple -- if they ever even felt Amazon was an actual threat in the space -- is no longer worried about Amazon slowing down iPad's influence and demand. Of course, none of this means that Amazon doesn't have a viable consumption device on its hands -- The Fire is great for what it is and what it does. Heck, I used to want one! But I already have an iPad, so... Maybe it's the iPad that's eating into Fire sales? [Image: allthingsd.com] 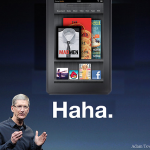 Tim Cook Unmoved By Potential Kindle Fire "Threat"
Nothing found :(
Try something else