You are using an outdated browser. Please upgrade your browser to improve your experience.
by Brent Dirks
February 13, 2012
Apple shares seem to be going only one way – up. Last week, we noticed Apple shares were about to breach $500, and it has finally happened. Buoyed by blow-out, first-quarter earnings, thanks in large part to the popularity of the iPhone, shares of Apple briefly traded as high as $503.83 earlier this morning on the NASDAQ and are hovering right around $500 this afternoon. While the mark is nothing more than psychological, the run up of shares has been impressive to say the least. Just eight years ago, in early 2004, the stock was trading for around $12. After that low, it’s been almost all positive for the company. And in just the last five years, Apple shares are up a mind-boggling 500 percent. Compare that to the general NASDAQ index, which is only up around 20 percent over the same time period. Apple now sports a $465.4 billion market cap, making it the world’s largest public company. Energy behemoth Exxon Mobil is in second place behind Apple with an almost $400 billion cap. For even more perspective, Apple is worth more than fierce competitors Microsoft and Google combined. The shares have been on an impressive upward course since Apple announced first-quarter 2012 earnings in late January. The company announced a record $46.33 billion revenue and a $13.86 billion profit with 37.04 million iPhones sold during the quarter. Since then, shares have moved from $420.41 to over the $500 mark. And with the launch of the iPad 3, iPhone 5 and possibly Apple TV this year, analysts believe the sky is the limit for the stock. According to a survey of analysts by Bloomberg, the stock is projected to climb even more, to $575.56. And that’s on the conservative side, with one analyst, Gene Munster saying his target for the stock is $670. So, have you broken your piggy bank to buy AAPL yet? 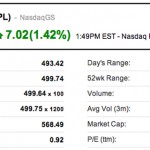 Huge iPhone Sales Help Propel Apple Shares Over $500
Nothing found :(
Try something else