You are using an outdated browser. Please upgrade your browser to improve your experience.
by Joe White
February 5, 2012
If you want Game Center achievements but can't be bothered to earn them, download Overachiever. This jailbreak tweak allows users to cheat at iOS app achievements, auto-filling users' Game Center profile with achievements they haven't actually earned. Once downloaded and installed, the free jailbreak tweak adds a pane in the Settings app via which users can choose which apps Overachiever auto-fills achievements for. If you switch the tweak on for, say, Doodle Jump, any remaining Game Center achievements you haven't legitimately earned will be granted automatically. Call me a humbug, but I don't like the sound of Overachiever - mainly because it means you'll never be able to take another user's Game Center profile seriously again. All those achievements they've been awarded for Temple Run? Yep - they downloaded Overachiever. If you want to cheat at Game Center, you can download Overachiever in the Cydia Store for free via the BigBoss Repository. If you have an opinion on the tweak, be sure to post it in the comments. [via iDownloadBlog] 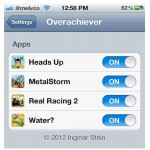 Jailbreak Only: Overachiever Can Auto-Fill Your Game Center Achievements
Nothing found :(
Try something else