You are using an outdated browser. Please upgrade your browser to improve your experience.
by Aldrin Calimlim
February 18, 2012
In the weeks leading to the reported announcement of the iPad 3 on March 7, more and more news of leaks and scoops about the new device’s specifications are expected to come out. The most recent one is a “confirmation” from MacRumors that the screen resolution of the iPad 3 will indeed be twice that of the iPad 2. MacRumors has somehow obtained one of the OEM LCD screen displays supposedly used in the production of the upcoming iteration of Apple’s bestselling tablet. Although the display couldn’t be powered on, a close examination through a microscope and a side-by-side comparison with an iPad 2 display confirmed what many speculators have long agreed upon regarding the iPad 3's resolution. The new display showed visible clusters of 4x4 pixels, as opposed to the groupings of 2x2 pixels found on the iPad 2. This finding amounts to a linear resolution of 2048x1536, twice the 1024x768 resolution of both the iPad 1 and iPad 2. This also qualifies the iPad 3 for the Retina display designation, which Apple reserves for screen densities that render the individual pixels invisible from a normal viewing distance, e.g. the iPhone 4’s display. And for developers, this means having to double the resolution of the graphics of their iPad apps, pronto. The iPad 3 is also rumored to have a high-speed A6 processor, with the cellular-enabled models said to support LTE technology. With its Retina display now all but confirmed, are you still on the fence about getting an iPad 3? Or are you already preparing to camp outside an Apple Store while waiting for its release? 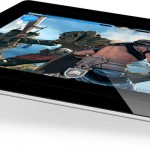 Leaked iPad 3 Display Confirms Resolution Twice That Of iPad 2
Nothing found :(
Try something else