You are using an outdated browser. Please upgrade your browser to improve your experience.
by Joe White
February 4, 2012
In a new study conducted by the mobile application monitoring company Crittercism, it is noted that iOS application crash more often than their Android counterparts. The results, as you can see in the above and below images, speak for themselves: most applications crash under iOS 5.0.1, while Android apps appear to be rather more stable. However, we should note here that the faults regarding iOS 5.0.1 most likely don't lie with Apple itself. Because this version of the mobile operating system is relatively new, it's more likely that iOS developers haven't made their own third-party apps fully compatible with the iOS - resulting in the crashing. Though, on the other hand, iOS 4.3.3 - which has indeed been available for some time - also caused a sizeable 10.66 percent of mobile apps to crash. Android, as you can see, is quite stable - its most recent Android 4.0.1 accounts for just 1.04 percent of mobile app crashes. Compare that with iOS 5.0.1's 28.64 percent! If you're wondering why iOS applications crash so much, there are a number of potential reasons - Forbes discusses some:

This can be due to hardware issues, such as the use of location or GPS services or cameras; it could be due to the Internet connection, that is, how a phone connects to 3G or WiFi, or that the device is not connected to the Internet at a certain moment, or that something happens during the switch between 3G and WiFi. There could also be issues with language support on certain devices. There can also be memory problems if an app uses too much memory.

Furthermore, the article highlights Apple's iAd system as being a potential problem - it apparently gives "developers problems if they [do] not adhere to certain standards." But that's not all. There's also the common problem of users not updating. The above chart is proof that iOS device users aren't all rocking the latest version of Apple's mobile operating system - people are lingering around on iOS 4.3.3, iOS 4.2.1 and even iOS 4.0. Though some fans do this to maintain a jailbreak or carrier unlock, others just don't care enough - or can't be bothered - to plug their handset into a computer and update their firmware. If this same philosophy is adopted regarding iOS app updates (which are designed, in part, to correct bugs which might cause app crashes), then a further explanation for the above data is made available to us. Do your iOS apps regularly crash? Are there any in particular which are more troublesome than others? Let us know in the comments. 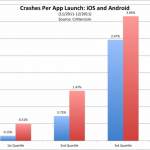