You are using an outdated browser. Please upgrade your browser to improve your experience.
by Casey Tschida
February 19, 2012
Sports Car Challenge, released in late 2011 by Volkswagen (China) and Fishlabs Entertainment, already had one major update before the end of the year and has now gained even more content, including a secondary race course. Arriving in Sports Car Challenge v1.2, the Yakeshi Yun Long Lake winter race track is a mix of ice and snow, challenging even the best drivers. Just like the Black Forest track, Yakeshi Yun Long is available for every car and all three of the gameplay modes. Beyond the new course, both the Slalom and Braking gameplay modes now include a Quick Restart button. Displayed under the pause and camera view buttons in the top-left, Quick Restart allows the racer to start their attempt completely over instead of waiting to be disqualified or simply driving around aimlessly. In an attempt to flatten and otherwise improve the scoring system, record times will be converted into a cumulative score in Sports Car Challenge v1.2 and later. Obviously, the faster you are in completing the objective, the higher your score! Sports Car Challenge is a universal app compatible with iPad, iPad 2, iPhone 3GS, iPhone 4, iPhone 4S, 32GB and 64GB third generation iPod touch, fourth generation iPod touch and newer running iOS 3.1 or later, and available in the App Store as a free download. 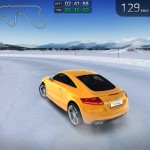