You are using an outdated browser. Please upgrade your browser to improve your experience.
by Aldrin Calimlim
February 27, 2012
As dictated by tradition, last night's 84th Annual Academy Awards ceremony showed a short segment honoring individuals in the film industry who have passed away in the time since the previous Oscars telecast. A number of movie stars, directors, writers and producers were remembered in the "In Memoriam" montage, along with notable people who excelled in the more technical professions in filmmaking. A rather touching inclusion in this montage, which featured actress Elizabeth Taylor, director Sidney Lumet and singer Whitney Houston, was the late co-founder and CEO of Apple, Steve Jobs. Near the end of the montage, which was played during a heartfelt rendition of "What a Wonderful World" by Esperanza Spalding and the Southern California Children's Choir, a portrait of Jobs was shown while a famous sound bite of his was heard in the background: "Stay hungry. Stay foolish." On screen, below his name was the word "Executive." Although he is best-known for his hugely important role at Apple, Jobs was also the co-founder and CEO of another pioneering company, Pixar Animation Studios. As recounted in Walter Isaacson's biography of Jobs, he was deeply involved in the inception and development of Pixar, with his influence felt in his provision of both financial support and technical advice. He is credited as executive producer for Pixar's first film, the groundbreaking "Toy Story." And the rest, as they say, is history. Jobs, who died of complications from pancreatic cancer in October last year, would've celebrated his 57th birthday last Feb. 24. His inclusion in the Oscars' remembrance of fallen film collaborators is apt, for without him the Academy Award-winning films "Finding Nemo," "WALL-E" and "Up," as well as other great animated films by Pixar, would've not existed. He was, as they say in "Harry Potter" parlance, a wizard among Muggles. 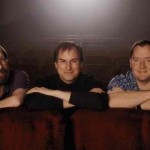 Steve Jobs' Role In The Film Industry Acknowledged At The Oscars

Steve Jobs' Role In The Film Industry Acknowledged At The Oscars
Nothing found :(
Try something else