You are using an outdated browser. Please upgrade your browser to improve your experience.
by Bryan M. Wolfe
February 29, 2012
With Apple officially set to announce the third-generation iPad next Wednesday, March 7, attention now turns to what type of goodies to expect the tablet to include. On this, customers can expect a “significant” hardware update versus the iPad 2, according to Apple Insider. The iPad 3 is expected to include a Retina display and Siri voice recognition. However, it is another possible hardware upgrade that is getting analysts most excited about Apple’s newest tablet. According to Shaw Wu with Sterne Agee, the iPad 3’s most significant feature could be 4G LTE connectivity. Because of this, Apple could see the company’s tablet sales climb to 55 million units in 2012. Last year, 40.9 million units were sold. Says Wu:

"We view the potential inclusion of 4G LTE as key with speeds approaching that of a quality personal computer experience. We also view as a positive indicator that the upcoming iPhone refresh in the fall timeframe will likely include this key feature as well."

Apple’s iPad 3 event is being held at the Yerba Buena Center for the Arts in San Francisco on Wednesday, March 7 at 10 a.m. PST. Be sure to make AppAdvice your one-stop source on the Web for everything iPad 3 related. Up to and including the March 7 announcement, AppAdvice will have you covered! How excited are you about the iPad 3? We'd love to know your thoughts and expectations! 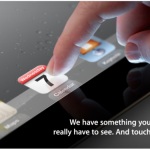 The iPad 3 Called 'Significant' Upgrade
Nothing found :(
Try something else