You are using an outdated browser. Please upgrade your browser to improve your experience.
by Aldrin Calimlim
February 29, 2012
A recent report has confirmed what many have long guessed about the user base of emerging social networking site Pinterest: that a large percentage of it is made up of females. A study dating back to several years ago, on the other hand, presented data that pointed to the dominance of male members in social news website Reddit. These two notions have been integrated in an iPad app released today, which combines the two sites into one screen and encourages simultaneous use by a Reddit-loving man and a Pinterest-loving woman. The iPad app, which is amusingly called Honeymoon ❤ Pinterest and Reddit for Lovers! (complete with a heart icon and an exclamation point), lets lovers enjoy each other's company as they browse their apparent website of choice. In landscape mode, one half of the screen is occupied by Pinterest while the other half is dedicated to Reddit. The idea is for you and your lover to delve into your preferred site at the same time. Supposedly, this way you'll be able to spend time together even as you're both focused on something else, which may be a heart-shaped cupcake on Pinterest if you're a she or an ongoing conversation with a famous stand-up comedian on Reddit if you're a he. It's a bit silly, but you have to admit that it's also rather sweet. Or not. Whether you can admit it or not also depends on your gender, I guess. Honeymoon ❤ Pinterest and Reddit for Lovers! is now available in the App Store for $0.99. Are you and your significant other ready to share an iPad and browse your respective favorite social media sites side by side? 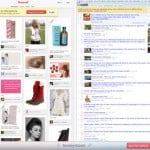