You are using an outdated browser. Please upgrade your browser to improve your experience.
by Aldrin Calimlim
March 3, 2012
Go to Apple's website right now and you'll be greeted by a colorful graphic that says, "A billion thanks. 25 times over." Yes, another important milestone in the history of the App Store has been reached: the 25 billionth app has finally been downloaded. Just a couple of weeks ago Apple announced that it was fast approaching this milestone by launching a contest that would award the person who would be so lucky as to be the downloader of the 25 billionth app delivered through the App Store or, alternatively, the entrant of the non-purchase form submission right after the 24,999,999,999th app was downloaded. And just moments ago that lucky person, whose name is as yet undisclosed, has won the offered prize of an App Store gift card worth $10,000. It's interesting to note that this event comes just eight months after the 15-billion app mark was reached by the hugely successful iOS app distribution system and just over a year after the 10 billionth app was downloaded. More noteworthy is the fact that the App Store is not even four years old yet, resulting in an amazing average of 18,768,768 apps downloaded per day since the App Store opened on July 10, 2008. Now let's start working towards 50 billion, shall we? 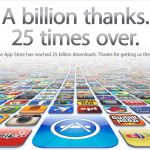