You are using an outdated browser. Please upgrade your browser to improve your experience.
by Brent Dirks
March 16, 2012
While you still look like an idiot taking pictures with your iPad, a comparison by Gizmodo shows that images from the new tablet are pretty good compared with other Apple products. The site did three comparisons with the new iPad's iSight camera against the iPad 2, the iPhone 4 and iPhone 4S. And while the winner was unsurprisingly the iPhone 4S and its 8-megapixel camera, the new iPad held up fairly well:

"The iPad camera is pretty damn good. But ultimately, the iPhone 4S is still tops. Details pop just a bit harder, and there's a little less noise. But the iPad camera is hands down superior to the iPhone 4's, and that in itself should be considered an impressive feat."

Against the iPad 2's wimpy 0.7-megapixel camera, the new iPad was easily declared the winner with the new iPad's images called sharp and detailed. The next comparison, against the iPhone 4, was the most interesting as both have what appear to be the same camera sensor. But thanks to the new iPad's processor, the new tablet won the battle with better handling of low-light situations, macro details and video recording. Compared to the reigning king of mobile phone cameras in the iPhone 4S, the new iPad wasn't able to capture as much detail or depth and was substantially more noisy. But the new iPad was able to squeak out a win against the iPhone 4S in video recording with results that were called "arguably sharper." What do you think about the results? Will you actually be shooting photos and video with your new iPad, or is there still too much of a social stigma? (Image via ipadincanada.ca) 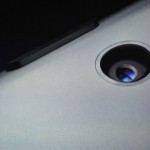 Camera On The New iPad Holds Up Well In Shootout

Camera On The New iPad Holds Up Well In Shootout
Nothing found :(
Try something else