You are using an outdated browser. Please upgrade your browser to improve your experience.
by Brent Dirks
March 22, 2012
While the next iPhone will probably not feature a super huge 4.6-inch screen, code found deep in iOS 5.1 is pointing to support for FaceTime over LTE along with calling over 4G networks. As reported on by iDownload Blog and confirmed by The Verge, the new information is an interesting development. While some were hoping that Apple would finally allow FaceTime over LTE with the introduction of the new iPad, the feature is still confined to Wi-Fi. The assumption was that Apple didn't want the feature on 3G networks because of the possibility of a less-than-optimal experience for users. The Verge speculates that Apple will wait to introduce FaceTime over LTE as a new feature for the iPhone with the possibility of unlocking the feature on the iPad (we can hope). The strings for 4G calling are also interesting as there is no network in the world that supports voice over LTE networks. Current LTE handsets handle voice calls over 3G. But Verizon (along with MetroPCS) are believed to be rolling out the new feature soon, so it is plausible that the new iPhone would allow voice calls over LTE. Some of the discovered information contained the "4G" verbiage, which is a little confusing after AT&T convinced Apple to change iOS 5.1 to display a 4G icon in the status bar for users of the company's HSPA+ network. But, The Verge said Apple is really talking about LTE.

Strangely, all of these strings inside the platform use the term "4G" specifically, which is confusing if nothing else — Apple made waves with the release of iOS 5.1 by changing the iPhone 4S status bar to read "4G" when connected to an HSPA+ network. By all accounts, though, Apple is definitely referring to LTE here: one such string, "FOUR_G_SWITCH", contains the text "Enable LTE". And besides, it would make even less sense for the company to enable FaceTime over the slower HSPA+ network at this point.

Are you excited about finally being able to make FaceTime calls away from a Wi-Fi network? Would the change finally help propel the feature into something useful? 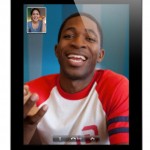 Can We Finally Say Goodbye To Needing Wi-Fi For FaceTime Calls?

Can We Finally Say Goodbye To Needing Wi-Fi For FaceTime Calls?
Nothing found :(
Try something else