You are using an outdated browser. Please upgrade your browser to improve your experience.
by Brent Dirks
March 15, 2012
For PayPal, it's apparently hip to be like Square. To battle the fast-growing credit card processor, PayPal unveiled its competing service today, "PayPal Here." And just like Square, PayPal's version is heavily iOS-centric. Instead of a square card reader, PayPal Here features a triangular reader that attaches to the headphone jack of an iDevice. The companion app isn't yet available in the App Store, but merchants don't have to be online to record transactions. PayPal's service is also undercutting Square by charging a 2.7 percent fee per transaction, which is less than Square's 2.75 percent fee. If a merchant uses a PayPal debit card, that transaction fee shrinks to 1.7 percent. PayPal is also offering immediate access to funds, beating Square's one-day delay. Interestingly, merchants don't even have to use the card reader. With PayPal Here's scan card feature, the device's camera can be used to read the credit card number. The user still needs to enter the CVV code and customer zip code. The service, which does offer encryption, is being rolled out to select merchants around the globe today and should be available to the general public soon. If you're interested in receiving more information, sign up on PayPal's website. Square, founded by Twitter's Jack Dorsey took the credit card processing world by storm after starting in 2010, and now processes $4 billion in payments yearly. The company recently introduced its Register app for the iPad, which features more analytical tools for small business owners and further tools to better manage sales. (Image via Mashable) 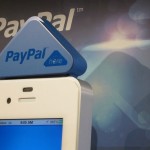 'PayPal Here' Service Looks To Compete In Credit Card Processing Arena
Nothing found :(
Try something else