You are using an outdated browser. Please upgrade your browser to improve your experience.
by Joe White
March 2, 2012
Though Apple's attention appears to be focused on its imminent iPad 3 launch, Piper Jaffray's Gene Munster has decided to talk a little more about the company's long-rumored HDTV device ("iTV"), and has performed a preliminary assessment of how such a product might affect the consumer electronics market as we know it. Munster expects Apple to launch the iTV this fall, potentially alongside the iPhone 5 (that will be some event, right?), and the analyst has imagined a design unlike anything we've yet seen ("just a sheet of glass - no edges or bezels"). Munster also expects the iTV to rely heavily on iTunes or iCloud (or both) as a means of providing consumable content for users, and suggests that the HDTV will also feature support for Siri. Perhaps most importantly - and, arguably, something that goes without saying - is Munster's predication that Apple's iTV is going to really change the consumer electronics market, in the same way the iPhone changed the smart phone market. He stated:

It’s going to live up to some of the building hype. It will be the biggest thing in consumer electronics since the smartphone.

In short, Munster thinks we all should be excited for Apple's HDTV, whatever it might be called and whenever it might launch. Though Apple's set-top box was something of a flop, whenever the company has ventured into a new market in the past (smart phone, tablet) it has abruptly changed that market - revolutionized it, even. Here's hoping the iTV is as revolutionary as the analysts expect it to be. As always, we'll keep you posted on the latest iTV-related news. [via 9to5Mac] 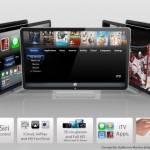