You are using an outdated browser. Please upgrade your browser to improve your experience.
by Brent Dirks
March 16, 2012
In a reversal that could only be characterized as stunning, the radio show "This American Life" is retracting its broadcast from January that featured Mike Daisey's travels to China and Apple supplier Foxconn. The report helped touch off a firestorm of criticism towards Apple and Foxconn regarding the treatment of workers. Take a look at our original report on the broadcast to see what Daisey claimed. But now, "This American Life" has discovered a number of fabrications. The broadcast used information from Daisey's one-man show "The Agony and the Ecstasy of Steve Jobs." In a sternly worded blog post and press release, the radio show is strongly distancing itself from the broadcast and Dasiey himself:

"The China correspondent for the public radio show Marketplace tracked down the interpreter that Daisey hired when he visited Shenzhen China. The interpreter disputed much of what Daisey has been saying on stage and on our show. On this week's episode of This American Life, we will devote the entire hour to detailing the errors in "Mr. Daisey Goes to the Apple Factory." Daisey lied to me and to This American Life producer Brian Reed during the fact checking we did on the story, before it was broadcast. That doesn't excuse the fact that we never should've put this on the air. In the end, this was our mistake. We're horrified to have let something like this onto public radio. Many dedicated reporters and editors - our friends and colleagues - have worked for years to build the reputation for accuracy and integrity that the journalism on public radio enjoys. It's trusted by so many people for good reason. Our program adheres to the same journalistic standards as the other national shows, and in this case, we did not live up to those standards."

Some of the falsehoods in the report are major, and others are minor. One of the most surprising apparent lies include Daisey's meeting with a group of workers on an iPhone assembly line who were poisoned by a chemical called n-hexane. The incident occurred in a factory in Suzhou, 1,000 miles away from the Shenzhen plant Daisey visited. Other parts of Daisey's work that were disputed by his interpreter included meeting underage workers and a man with a mangled hand making iPads at Foxconn. For his part, in a blog post, Daisey is now admitting that all the information was not exactly factual:

"I stand by my work. My show is a theatrical piece whose goal is to create a human connection between our gorgeous devices and the brutal circumstances from which they emerge. It uses a combination of fact, memoir, and dramatic license to tell its story, and I believe it does so with integrity. Certainly, the comprehensive investigations undertaken by The New York Times and a number of labor rights groups to document conditions in electronics manufacturing would seem to bear this out. What I do is not journalism. The tools of the theater are not the same as the tools of journalism. For this reason, I regret that I allowed THIS AMERICAN LIFE to air an excerpt from my monologue. THIS AMERICAN LIFE is essentially a journalistic - not a theatrical - enterprise, and as such it operates under a different set of rules and expectations. But this is my only regret. I am proud that my work seems to have sparked a growing storm of attention and concern over the often appalling conditions under which many of the high-tech products we love so much are assembled in China."

Daisey seems to want to have it both ways, it's either journalism or theatre, it can't be both. It took him this long to figure out that "This American Life" isn't theatre? While producers from the show were able to call out specific inaccuracies, it's hard for me to believe anything Daisey has said is fact. What do you think about this surprising development? Does the fault lie with "This American Life" for not doing a better job of fact-checking, or with Daisey for having no issues fusing fact and fiction together? (Image via onpdx.com) 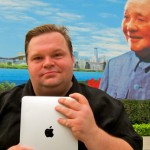 'This American Life' Issues Stunning Retraction On Show Critical Of Apple, Foxconn
Nothing found :(
Try something else