You are using an outdated browser. Please upgrade your browser to improve your experience.
by Casey Tschida
April 18, 2012
One of iHome’s more affordable product offerings, the iP18 color changing alarm clock and speaker system for iPhone and iPod touch has a decent set of features, but does fall a bit short reaching its full potential. This four-and-three-quarter-inch rounded edge cube has a silver top, which contains the control panel and iDevice dock, that continues partially down the sides with the rest being semi-transparent. Of course, the frosty colored surface is designed to allow the internal LEDs to change the clock's body and digital display's background color. Adjusted by the Color button on the control panel, the iP18 offers four different color change options: slow fade, fast change, steady, and off. While there's nothing wrong with these choices, I feel some obvious selections were omitted. A brightness control would be really nice and setting a favorite color is clumsy, requiring the selection to be made using a pause method instead of via a menu. Much closer to expectations, the alarm clock features a properly sized display, dual independent alarms, snooze, battery backup, and time sync. As you would likely guess, the alarm can either be music from your iDevice or a traditional alarm clock sound. So, what's the gripe now? The LED color change can sometimes make the display tough to read. To provide the aforementioned and general music playback capabilities, the iP18's third feature is a built-in speaker and audio controls. Configured in a rear firing position, the single speaker performs best when faced toward a wall or other flat object to deflect the sound frontwards. Like many other smaller size, supposedly full-range speakers, high and low frequency reproduction is somewhat weak and sloppy. Although, sound quality is plenty suitable for most music types. The playback controls are located on the top of the unit and consist of volume up, volume down, play, pause, previous, and next. In addition, the iP18 includes a sleep timer, so you can fall asleep to soothing tunes without worrying about the music playing all night. Overall, the iP18 is a reasonable choice for low budget consumers looking for a nifty alarm clock and speaker system for their iPhone or iPod touch. It obviously has shortcomings, however, they don't prevent this sub-$75 product from being a children's nightlight, unique and useful bedside clock, convenient mood setter, and more. The iP18 is available directly from iHome's website for the suggested retail price of $69.99. The package contains the iP18 color changing clock and speaker, AC power adapter, manual, and three iDevice inserts. 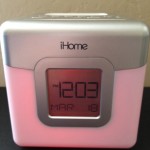 A Hands-On Look At The iHome iP18 Color Changing Alarm Clock And Speaker
Nothing found :(
Try something else