You are using an outdated browser. Please upgrade your browser to improve your experience.
by Brent Dirks
April 11, 2012
A little more than a month after its introduction, Chipworks has found a pair of interesting tidbits regarding the new Apple TV’s A5 chip. According to AppleInsider, Chipworks released a teardown report stating the A5 chip, advertised as a single-core processor, is actually dual-core. One core is simply disabled.

The advanced media was calling this new A5 a single core application processor, with justification, since Apple themselves on their product specification page say that the new TV uses a single core application processor. Sometimes, when we get inside technology, we find that things are not always what they are supposed to be. The new A5 processor die is not a single core processor, but contains a dual core processor. Either Apple is only utilizing one core or they are binning parts. Parts binning is a common process in semiconductors where devices are segregated (binned) based on meeting a subset of the overall requirements, in this case they could disable the “bad” core, this increases the usable die per wafer, lowering the cost.

And along with the dual-core surprise, the chip is also 41 percent smaller than the A5 chip featured in the iPad 2 and iPhone 4S. The Apple TV’s chip is 32 nm, compared to 45 nm for last year’s A5. Chipworks speculates that the smaller A5 chip could be used for two things – to power a new iPhone or to reduce the manufacturing cost of the existing iPad 2 and iPhone 4S. The third-generation Apple TV is anchored by 1080p video streaming. After being released in early March, there was a 1-2 week wait for the new device. But Apple’s online store currently lists the model as in stock. 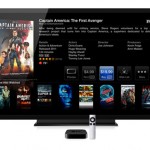 A5 Chip Powering New Apple TV Is Smaller, Cheaper To Produce
Nothing found :(
Try something else