You are using an outdated browser. Please upgrade your browser to improve your experience.
by Bryan M. Wolfe
April 10, 2012
As expected, Amazon is joining Apple and Google in offering their mobile customers the ability to make in-app purchases. The world’s largest online retailer’s in-app purchase marketplace arrives today for customers and developers. Now out of beta, Amazon’s service allows both subscriptions and purchases of individual items within apps, similar to the way Apple and Google already do through their mobile devices. In doing so, Amazon most likely will see a rise in sales from the company’s popular Kindle Fire tablet, which first launched in November. Purchases will be made using Amazon’s popular 1-Click system. Top developers including ZeptoLab, Disney, Glu Mobile Inc., Storm8, Social Gaming Network, Gameloft, G5 Entertainment Inc., and top publishers like Condé Nast, Dow Jones and New York Post, have already integrated Amazon Appstore’s In-App Purchasing API and are offering millions of Amazon customers in-app content and subscriptions. According to Aaron Rubenson, Director of Amazon Appstore:

“Amazon Appstore’s In-App Purchasing service enables developers to generate more revenue from their apps. In-App Purchasing is simple to integrate and gives developers access to millions of Amazon customers who are already familiar with Amazon’s 1-Click payment system. Many of Amazon Appstore’s customers have shopped with Amazon before and they trust Amazon’s easy payment process, which leads to higher conversion of developers’ in-app content and subscriptions.”

In-app purchases are expected to generate $5.6 billion in revenue in 2015, versus $970 million in 2011. Amazon is charging a 30 percent commission to clients for its in-app purchase service, the same rate as it charges developers for app sales. While this news should have no short-term effect on Apple, it could make it more difficult for the Cupertino, California-based company to grab current Kindle Fire users in the future. After all, the more money customers spend in one ecosystem, the less likely they'll go somewhere else. 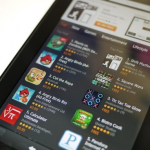