You are using an outdated browser. Please upgrade your browser to improve your experience.
by Bryan M. Wolfe
April 20, 2012
Apple and Proview are said to be nearing a deal to resolve their ongoing trademark fight over the “iPad” name. Ma Dongxiao, a lawyer representing the Chinese company Proview, said on Friday the talks were happening, but declined to offer details, according to PCWorld. As you may recall, Apple claims it purchased the rights to the iPad name from Proview Taiwan in 2006. However, parent company Proview Shenzhen claims that deal to be null and void. At issue is whether Apple can keep using the iPad name in China. According to today's report, both sides are coming together in China under a “mediation procedure” to negotiate a possible settlement. If Apple and Proview cannot resolve their differences, it will up to a higher court to determine whether Proview's case is sound. Earlier this week, we reported that Apple’s decision to exclude China from the list of countries where the new iPad is sold may have been tied to the Proview case. At the time, many felt this was Apple’s way of putting pressure on Beijing. Perhaps Apple's decision worked. Stay tuned. 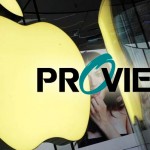 Apple, Proview Looking For Way Out Of Trademark Dispute

Apple, Proview Looking For Way Out Of Trademark Dispute
Nothing found :(
Try something else