You are using an outdated browser. Please upgrade your browser to improve your experience.
by Bryan M. Wolfe
April 25, 2012
Over the course of the past five years, Apple has sold 365 million digital devices. During the last quarter alone, 50 million iDevices found a home somewhere on the planet. In doing so, Apple makes $4 billion per month and has amassed nearly $110 billion in cash. What’s Apple’s secret? Time believes three forces keep the Cupertino, California company moving forward: innovation, opportunity, and execution.

Apple, according to the report, follows a key lesson that Steve Jobs learned, skate to where the puck will be. In other words, instead of relying on what customers say they want, Apple has zeroed in on what customers didn’t know they needed.

For the first time, consumers felt like their computer was mobile. Now, the iPad has introduced an entirely new PC product line to the popular market — one that’s reshaping centuries-old traditions of paper-based reading. One need only observe New York City’s subway lines on a morning commute to understand how quickly the change from print to digital is happening.

Be honest; in 2009, did you think you'd ever need a tablet at home and in the workplace?

In March, for the very first time, smartphones outnumbered basic mobile phones. At the same time, tablets, which were unheard of just years ago, are making an impact both at home and in business. The end result is an “app economy,” which Apple has successfully developed and maintained, despite some modest competition. At the same time, Apple has recognized that Asia and new developing markets are just beginning to boom. To date, 55 percent of Apple’s sales come from foreign countries.

Steve Jobs’ death in October was significant, but that hasn’t stopped Apple from moving forward. In fact, Tim Cook’s early success as the company’s new CEO is tied closely with how he and Jobs worked together for nearly a decade. While Jobs focused on Apple’s “vision,” Cook was responsible in executing that vision as COO. Now as CEO, Cook is taking what he learned from the late co-founder and adding his own touch.

Cook knows that he’s at the tiller of a juggernaut, and his thoughtful and poised manner has won him fans from the Apple commentariat.

Of course, no one can see the future. But, for now, Apple’s fortunes look to remain bright well into the future. Besides innovation, opportunity, and execution, what other factors have kept Apple moving in the right direction? Concerns for their future? 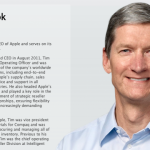 Apple's Secrets To Success
Nothing found :(
Try something else