You are using an outdated browser. Please upgrade your browser to improve your experience.
by A.T. Faust III
April 5, 2012
Ever since Steve Jobs famously derided the stylus' place in our post-PC world, the market for iPad- and iPhone-compatible writing implements has been fiercely competitive. I personally own several, and rarely is one released to the retail market that I don't get my hands on and put through its paces. When Arctic sent me their Architect stylus, I thought it'd make for an easy, quick review. After all, it boasts a traditional-looking, dome-tipped rubber nib (perhaps "nub" is more apt), and there didn't seem much difference between it and the generic Best Buy fare we've all come across over the last few years. Outwardly, of course, the Architect stylus is far more handsome than most of its competitors, and its milled aluminum shaft matches exactly the iPad's backside in texture and tone. Together, the two make an elegant pair. As its most distinguishing feature, the Architect sports a distinctive screw-on cap to protect its capacitive tip. When the stylus is in use, the cap screws conveniently onto the other end, providing a rounded, comfortable contact point that fits perfectly in the hand. Its stylish, vertical opening -- looking like the black-lacquered eye of some giant needle -- is designed to take a large keyring or small lanyard, so you can accessorize your accessory to add your own personal flair. But, with styli, looks are hardly as important as performance, and it's in this regard that the Architect impressed me most. Usually, styli of this sort end up being mushy, erratic, and functionally imprecise. Not so with the Architect. Instead, I found the experience pleasant and efficient. What stood out most, though, was the Architect's pressure-sensitive scribing surface. Now, I don't mean pressure-sensitive in the standard digital sense à la Wacom, I mean pressure-sensitive in the sense that you've actually got to put some firmness behind your strokes for any input to register. It's almost like the nib's outer surface has to be pushed down into some mystery layer to take effect, and the resulting feel is quite satisfying. Even cooler, once you initiate that contact, you can ease up on the force and continue writing lines and drawing doodles without interruption. I don't know how they did it, but Arctic dialed in this thing's responsiveness like crazy. Tested against other styli of its type, the Architect took noticeably more operator intent to register. For artists and writers, that's a very good thing. No more accidental input! Arctic's Architect has replaced most of my other styli (with one ever-present and undefeated exception), and it's more forgiving and fun to use than nearly anything else in the $25 price range. It's not some goofy gimmick or metaphorical chore -- It's just a well-designed, straightforward stylus that does everything you ask of it. The Architect comes with a custom carry pouch, and you can purchase yours directly from Arctic for $24.95. Free shipping is available. Now if only this thing came trimmed in white... [gallery link="file" order="DESC"] 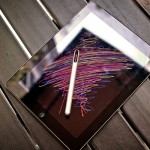 Introducing The Architect: One Of The Best-Looking, Best-Performing Styli On The Market

Introducing The Architect: One Of The Best-Looking, Best-Performing Styli On The Market
Nothing found :(
Try something else