You are using an outdated browser. Please upgrade your browser to improve your experience.
by A.T. Faust III
April 7, 2012
When Jeffries analyst Peter Misek opined earlier this week that Apple's so-called "iTV" would in fact be called the "iPanel," my first reaction was a chuckling "Not a chance." It just sounded too technical, too unwieldy, too nondescript. In an effort to find a name better suited to Apple's style, I spent an afternoon plodding through synonyms at Thesaurus.com. Using basic search terms like "screen," "display," "monitor," and "theater," I came up with a long(ish) list of potential brand names. Naturally, some entries are better than others, some aren't metaphorically appropriate, many are likely trademarked by other companies, and most are clearly not up Apple's alley. Plus, you know, a few just sound plain dumb. Without further ado (top choices in bold): Of course, Apple's options aren't limited to the expected "i" prefix, and Tim Cook's marketing machine could just as easily use one of the following: So, by my reasoning, Apple's TV set will probably be called iCinema, iDisplay, iHDTV, iLCD, iPane, iPanel, iRTV, iScape, iScene, iScreen, iTheater, iTV, Apple iTV, Apple HDTV, Apple LCD TV, Apple Retina TV, Apple RTV, or Apple TV. I wouldn't think it's worth Apple's effort to rebrand its current Apple TV when other viable names exist. Of course, the company does already own the trademark, and the set-top Apple TV moniker could be confusing once Apple has a real TV on the market. I do, however, think Apple would sooner call the unit "Apple TV" than buy out the iTV name or pay years of legal fees. Meanwhile, "Retina" has become a powerful marketing term, and -- if the specs support it -- it's not out of the question for Apple to include said designation in the official name. Still, "iRTV" doesn't really sound too good out loud, and "Apple RTV" is hardly better. If a Retina display is included and mentioned, I believe the set would more readily be called "Apple Retina TV." Indeed, I think that's a lot more likely than "iHDTV" or "Apple HDTV." Because specs don't matter when using more general terms, Apple could future-proof its purported product by simply calling it "iLCD," "Apple LCD TV," or "Apple LED TV." But these take too long to say, and they're clunky to boot. Like I said before, they've got too many abbreviations. And remember, using these kinds of generic terms has never been Apple's favorite course of action. That leaves the real contenders: iCinema, iDisplay, iPane, iPanel, iScape, iScreen, iScene, or iTheater. However, "iScape" seems a bit too ethereal to be practical, and "iScene" -- like "iCinema" or, to a lesser extent, "iTheater" -- is probably too limited in scope for everything Apple wants to achieve. That said, "iTheater" is definitely my darkhorse pick. Of the remaining four options, "iDisplay" sounds too much like one of Apple's desktop monitors (LED Cinema Display, Thunderbolt Display). While that could be a boon in some ways, Apple does try to differentiate its Mac and iOS experiences. A similar problem faces "iScreen," but it certainly sounds more fitting for the casual living room environment. Somehow, though, I just don't like it as well as "iPane" or "iPanel." Between the two, of course, "iPanel" wins easily. If anyone expected the TV to feature transparent display technology, "iPane" would be a sure thing. Perhaps one day it'll actually exist. But not right now. No, right now, I really feel like "iPanel" is where it's at. The word evokes every aspect of the vibe Apple's hoping to convey. In addition to being a TV and DVD/Blu-ray player, the panel will likely include a custom iOS build featuring Game Center, a Web browser, FaceTime and iMessage capabilities, Siri voice-recognition, iTunes access, and various media hub services. As Misek says, it might even include some home automation aspects. "TV" is simply not a broad enough idea for something like this, and "iPanel" isn't bound or limited by specs, existing technologies, or any other set of fleeting parameters. It's perfect, really, and even though I wasn't a fan at first, it's grown on me in surprisingly short order. For me, making this list just reinforced the merits of the "iPanel" option, and I'm excited to see what name Apple ultimately chooses. You know, if they actually release this thing at all. 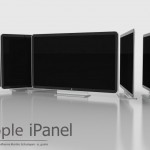 It's Not The Only Good Name, But 'iPanel' Sure Feels Right

It's Not The Only Good Name, But 'iPanel' Sure Feels Right
Nothing found :(
Try something else