You are using an outdated browser. Please upgrade your browser to improve your experience.
by Brent Dirks
April 30, 2012
Skype released version 4.0 of its iOS app today with an interesting auto-restart feature to go along with minor fixes. The auto-restart function promises that the app will automatically restart after an unexpected shutdown. That’s an interesting and unique feature that I haven’t seen in any other iOS apps, but would definitely come in handy so you can hop back on a voice or video call as fast as possible. The other major change in the version is the ability to move your own video preview on the screen. That change puts Skype on par with Apple’s own FaceTime, which also allows your own video preview to be moved around during a call. Other changes touted by Skype include a new sign-in screen, improved accessibility, improved stability, other minor UI improvements, and bug fixes. Skype 4.0 is a universal app for both the iPhone and iPad. The app is free and available in the App Store. While I personally prefer FaceTime on my own iOS devices, I’m glad to see Skype continuing to refine and improve its experience. 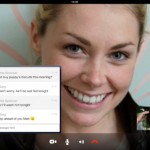 New Skype Version Brings Unique Feature Along With Assorted Minor Fixes
Nothing found :(
Try something else