You are using an outdated browser. Please upgrade your browser to improve your experience.
by Brent Dirks
April 24, 2012
Apple’s latest version of iPhoto for the Mac will apparently borrow heavily from the iOS edition released last month. AppleInsider is pointing to a rumor from Dutch website Apple Weetjes that says iPhoto ’12 for the Mac will be released sometime this summer on the Mac App Store and be “largely inspired” by the iOS version. The rumor highlights three specific features of iPhoto ’12. First, users will apparently be able to create and share a Photo Album via iCloud, which replaces the MobileMe gallery function. Next, users will be able to share, edit, and transfer pictures easily between the iOS and desktop versions of iPhoto. Finally, photo retouching on the desktop edition will be inspired by iOS. The new version of iPhoto will apparently only run on Macs with OS X 10.7 Lion or OS X 10.8 Mountain Lion, leaving Snow Leopard users out in the cold. The iOS version was released in early March during the unveiling of the new iPad. In our own in-depth review, Christine Chan was disappointed with the over dependence on skeuomorphism and said the version was more confusing than its Mac cousin. But consumers seemed to flock to the iOS version as Apple reported selling more than 1 million copies of the app in its first 10 days of release. What features of the iOS version would you like to see be adopted by its desktop cousin? I like keeping the ease-of-use of the desktop version combined with simpler sharing and editing between computer and iOS device. While the iOS version took some time getting used to, it's now my default photo editor on the iPad, and I'm interested to see how Apple plans to modify the desktop experience - skeuomorphism or not. 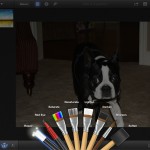 Next Version Of iPhoto For The Mac Rumored To Borrow Heavily From iOS Version
Nothing found :(
Try something else