You are using an outdated browser. Please upgrade your browser to improve your experience.
by Brent Dirks
April 13, 2012
After making the upgrade to the new iPad on launch day last month, I had one slight problem – I needed a case ... and not just any case. While my original iPad was clad with the Otterbox Defender that kept the tablet protected like a newborn baby, the setup almost doubled the iPad's weight. At times, the Defender made it feel like I was trying to carry around a small laptop with just one hand. With two young children at home, I made the mistake of thinking Apple's Smart Cover would adequately protect my new iPad. I was wrong. While I liked the ease and simplicity of the Apple's solution, I imagined my newest child quickly being broken by my overzealous, tablet-loving 4-year-old. Since Apple didn't seem to want to release the rumored smart case that would finally offer full body protection, I had to strike out on my own to find a solution that strongly protected my iPad, but didn't weigh it down significantly. And I found a very compelling solution with the Canvas from SwitchEasy.

While I originally was turned off by folio-type cases, the Canvas helped to change my thinking. Available in black, red, gray, and brown, the case features two layers of protection: a spongy-soft outer layer protecting the entire iPad and a hard-surfaced polycarbonate shell that attaches to the tablet's back. The iPad's dock connector, switches, and buttons are exposed and available to be used. And unlike other folio cases I've seen previously, the camera lens isn't covered at all. The Canvas can also convert into a stand very quickly. After flipping the case around, a strip of strong Velcro can be undone that attaches the bottom part of the outer case to inner shell. The case then can be placed in a number of very usable angles. SwitchEasy also throws in a ton of extras for buyers of the case. Included along with the case is a screen protector and squeegee for installation, microfiber cloth, two headphone jack protectors, and two dock connector protectors.

SwitchEasy touts the Canvas as featuring automatic on-and-off capabilities. While the case uses a magnet to activate the feature, don't expect a strong hold. Numerous times while carrying around the closed case, the front cover moved enough for me to hear the dreaded "click" sound. While it's understandable that SwitchEasy didn't want to put an enormously strong magnet on the case, it should definitely be better – more like the Smart Cover magnets. The stand is one of my favorite parts of the case, but there is also a drawback. The previous version of the case for the iPad 2 had three ridges that kept the tablet stable in a choice of angles. The current version instead has a raised, textured fiber lining that allows for a variety of stand positions. The issue is that the textured lining isn't very deep, and the rubber feet don't provide an enormously steady experience. On more than a few occasions, while attempting to type or navigate the iPad in the stand position, just a little bit of pressure causes the case to collapse with an emphatic thud. Obviously, with the back protection, there is no possibility of scratching or damaging your iPad. But it's still annoying. The grooves should be deeper and straighter.

Despite those limited drawbacks, the Canvas is one of my favorite cases I have ever used for any generation iPad. It does a great job providing full body protection while still keeping the new iPad's slim and sleek profile. The case, also compatible with the iPad 2, is $49.99. Most colors are available through SwitchEasy's site now. Amazon is also offering all colors of the case, but is quoting a two to four week wait for shipping. What case are you using to protect your new iPad? Are there any we should take a look at and review? 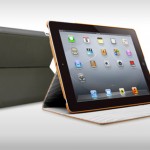 SwitchEasy Canvas Provides Full Body Protection For The New iPad In Slim Package
Nothing found :(
Try something else