You are using an outdated browser. Please upgrade your browser to improve your experience.
by A.T. Faust III
April 10, 2012
Today's dose of gadget speculation comes from The Verge's forums (via 9to5Mac), where user modilwar has crafted the following mock-up of the as-yet-unannounced iPhone's potential 4-inch display: The benefit to this solution is, of course, that Apple wouldn't have to abandon its 326 PPI fabrication process in cramming a bigger screen into a similar (or perhaps even identical) form factor. Answering the question of just how Apple might achieve this, modilwar explains:

And so on. It is, of course, nonsense. Aside from an innate desire to avoid the inherent one-handed usability problems such an elongated screen presents, Apple is historically unwilling to alienate existing developers and apps by introducing the App Store to fundamental, far-reaching compatibility issues. The potential for fragmentation is overwhelming, and every non-updated iPhone app would be immediately rendered... poorly rendered. iDownloadBlog points out that

[t]here’s two ways Apple could handle this. One, would be to stretch the app’s UI across the screen — which would look terrible. Or two, it could letter-box the app in its natural 960 x 640 area, meaning you’d see black space on either side of it. It seems, however, that both of these solutions would create Android-like fragmentation problems.

There's actually a third way, too: Apple could simply increase the iPhone's screen size without changing its aspect ratio. Which is, you know, exactly what the company's most likely to do. We already covered this eventuality at length, and -- since the new iPad looks plenty pixel-dense at 264 PPI -- it's not out of the question that Apple could successfully reduce said specs without disrupting the iPhone's Retina branding. Personally, I've got no time for a display as tall and unwieldy as the one shown in the concept above. The top quarter of the touchscreen would be only slightly better than completely useless under most typical usage scenarios. I don't want to use both hands to open apps and search through contacts and check email and call my friends. And if I want to use two hands to browse the Web or play games, I'll simply use something else. 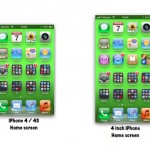 The Rumored 4-Inch iPhone Might Become A Reality, But Not Like This
Nothing found :(
Try something else