You are using an outdated browser. Please upgrade your browser to improve your experience.
by Aldrin Calimlim
April 11, 2012
This just in: Apple's online store is, once again, down. But the notable thing about this familiar occurrence is the instantly noticeable change in the way visitors of the online store are notified of its temporary closure. For years, we have been informed of the store's inoperability by a friendly yellow sticky note with the words, "We'll be back soon," written on it in marker felt, as was the case right before the new iPad was announced last March 7. Now, it appears that the sticky note has been disposed of by Apple in favor of a more modern-looking graphic in which the company's logo is prominently featured. Further, as noted by MacRumors, the graphic is set against a light linen background similar to the ubiquitous backcloth on iOS. More often than not, Apple's online store is rendered inoperative in anticipation of a new product or two. But it's highly likely that the current downtime is due to planned maintenance activities only. Regardless of the importance of the site's unavailability at the moment, the new notification graphic certainly looks more in sync with Apple's modern minimalist design principles. That's one virtual sticky note down, lots more skeuomorphs to go. 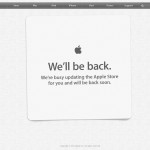 The Sticky Note Is Dead! Long Live The New 'Apple Store Is Down' Graphic!

The Sticky Note Is Dead! Long Live The New 'Apple Store Is Down' Graphic!
Nothing found :(
Try something else