You are using an outdated browser. Please upgrade your browser to improve your experience.
by Bryan M. Wolfe
April 11, 2012
The U.S. Justice Department today filed an antitrust lawsuit against Apple and five of the nation’s largest publishers. The government alleges that the parties conspired to limit competition for the pricing of e-books, according to The Wall Street Journal. According to the lawsuit, filed in Manhattan federal court, the companies decided collectively to end retail price competition and in doing so, guaranteed Apple’s its 30 percent commission on each e-book sold. The case resolves around the use of an agency model, where publishers, not retailers set the price for each book and e-book sold. The lawsuit states:

"Defendants' ongoing conspiracy and agreement have caused e-book consumers to pay tens of millions of dollars more for e-books than they otherwise would have paid.”

In addition to Apple, companies targeted include: Penguin Group, Macmillan, . (see below). Just last month, Apple said that it just wants to sell e-books in the company’s iBookstore and has absolutely no incentive to drive up prices. Today’s lawsuit, plus one brewing in the European Union, and a separate class action lawsuit, stem from comments the late Apple CEO Steve Jobs made to The Wall Street Journal’s Walt Mossberg prior to the January 2010 announcement of the first iPad. At the time, Jobs said Amazon “screwed it up,” with regards to e-book pricing. Jobs stated:

“We told the publishers, ‘We’ll go to the agency model, where you set the price, and we get our 30%, and yes, the customer pays a little more, but that’s what you want anyway… They went to Amazon and said, ‘You’re going to sign an agency contract or we’re not going to give you the books.’ “

Updated: The Department of Justice has confirmed that Hachette, HarperCollins, and Simon & Schuster have settled allegations of e-book price fixing. Three companies, including Apple, will fight the charges in court. Whether Apple has been involved in price fixing remains to be seen. Still, there is no denying that most of the more popular e-books available today are priced exactly the same both in the iBookstore and through Amazon. Do you think Apple was involved in e-book price fixing? If so, what should be done about it? 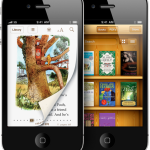