You are using an outdated browser. Please upgrade your browser to improve your experience.
by Brent Dirks
April 2, 2012
The next generation of iMacs may be sporting a long sought after, anti-reflective display, according to a report from MacRumors. And here’s hoping the option will come to the iPhone and iPad sooner than later. Along with ramping up production of screens for the new iPad, G-Tech Optoelectronics is apparently working with Apple to produce a new anti-reflective screen for the iMac, which is expected to receive a refresh sometime this year after Intel’s Ivy Bridge chips are released. Currently, the entire iMac line sports a glass front. And depending on where the screen is located and the amount of light in the room, the display can easily washout in a mass of glare. If the iMac’s did receive the anti-glare glass, the line would join the 15- and 17-inch MacBook Pros that can be special ordered with a matte screen. But, for me, the big question is would Apple ever decide to make iPads or iPhones with a matte or anti-reflective screen. One of the louder complaints I hear regarding iDevices is that the screens are washed out in direct light. Even Amazon took shots at the iPad’s screen in a set of commercials for its Kindle book reader. And apparently, judging by the accessory market for screen protectors, there is a group of iPad and iPhone users who are pining for a matte screen. Even Apple is selling the pictured Power Support Anti-Glare film for the iPhone 4S/4 in its retail stores. I purchased the film when I received my iPhone 4S this fall, and did try it out for a little while. While my iPhone was more readable in bright light situations, the screen looked muddied and washed out. And I eventually took the protector off, willing to live with some glare for the full bright-and-beautiful Retina screen experience. But could an Apple-designed iDevice anti-glare screen be better? I think it could, and hopefully we might see one sooner than later as an option to purchase. Would you buy an iPhone or iPad with anti-reflective coating? Or would it ruin the screen experience on both devices? 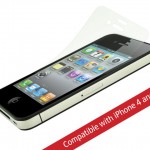 Will An Anti-Reflective Screen Ever Come To The iPhone And iPad?

Will An Anti-Reflective Screen Ever Come To The iPhone And iPad?
Nothing found :(
Try something else