You are using an outdated browser. Please upgrade your browser to improve your experience.
by Bryan M. Wolfe
May 16, 2012
Three months after a class action lawsuit was filed against Apple over Siri’s apparent lack of functionality, the company is asking a court to dismiss the charges. What makes this story interesting isn’t that the company wants to see the charges go away, but rather their defense, according to The Wall Street Journal. According to court filings, Apple claims that anyone unhappy with the voice recognition service on the iPhone 4S should have returned the product within 30 days. In addition, they claim (correctly) that Siri remains in beta. From Apple’s motion to dismiss:

Tellingly, although Plaintiffs claim they became dissatisfied with Siri's performance "soon after" purchasing their iPhones, they made no attempt to avail themselves of Apple's 30-day return policy or one-year warranty-which remains in effect. Instead, they seek to take an alleged personal grievance about the purported performance of a popular product and turn it into a nationwide class action under California's consumer protection statutes. The Complaint does not come close to meeting the heavy burden necessary to sustain such claims.

The iPhone 4S launched with Siri in October.

While it is true that Siri remains in beta, that hasn’t kept the company from advertising the service in ads. Plus, Siri remains front-and-center on Apple’s iPhone webpage. With this in mind, Apple’s position sounds a bit suspect. Rather than fighting customers in court, perhaps Apple would be wiser to improve the product in question. Besides, can anyone explain why Siri remains in beta seven months after its release? See our recent report on how Apple could make Siri better, Time For Apple To Muzzle Siri Or Make The Assistant Better. Should the class action lawsuit against Apple over Siri continue? Source: The Wall Street Journal 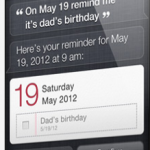 Apple Can't Defend Siri's Performance Even In Court Filings
Nothing found :(
Try something else