You are using an outdated browser. Please upgrade your browser to improve your experience.
by Joe White
May 16, 2012
Anton Kudin (@AntonKudin), an interface and Web designer and Dribbble user, has recently created the image of an awesome fold-to-unlock iOS concept and posted it to the popular idea-sharing website. The image, above, shows an idea: a fold-to-unlock interface for Apple's mobile operating system. The concept involves abandoning the slide-to-unlock method of unlocking an iPhone, and instead swiping a finger across the screen (from left to right), which would have the effect of "folding" away the Lock screen. Kudin admits he ported the idea to the iOS from another Dribbble user, who created the concept image of a fold-to-unlock interface for Android. Though it's probably unlikely we'll see Apple offer an alternate means of unlocking iPhone handsets in iOS 6 (or iOS 7, for that matter), this kind of idea could be something we see the jailbreak community develop - it would certainly be a tweak I'd download and use on my iPhone handset. For now, fold-to-unlock remains a simple (but brilliant) concept - you can view the image over in its original habitat at Dribbble, where a heap of commenters have expressed their love for Kudin's design. You can share your thoughts using our comments below, too. Via: Dribbble 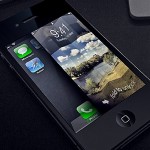 Apple, Please Implement This Fold-To-Unlock Concept In iOS
Nothing found :(
Try something else