You are using an outdated browser. Please upgrade your browser to improve your experience.
by Brent Dirks
May 15, 2012
Apple received a huge amount of product placement in 2011 with iOS devices appearing in 40 percent of the top box office movies. And on the small screen last year, the company's products were mentioned a staggering 891 times. How much does Apple pay for the exposure? Absolutely nothing. Bloomberg Businessweek says that Apple product placement has risen a sharp 45 percent from 2009 to 2011, mirroring the company's rise to prominence. For example, in the 2011 movie "Mission Impossible: Ghost Protocol," Apple products like the iPhone, iPad, and iMac received almost eight minutes of screen time in the blockbuster. The screen placement was estimated to be worth around $23 million. And Apple got it for free. The increased product placement couldn't come at a better time. With the rise of the DVR, viewers are watching fewer advertisements. A recent iCloud spot was viewed 15 percent less favorably than previous television advertisements from the company.

"Apple hasn't been up to its normal brilliant performance for much of the past year," says Ace Metrix Chief Executive Officer Peter Daboll.

So what's on the big screen and television is driving more purchases thanks to the rise of social media and Facebook. But while Apple won't pay for product placement, Hollywood producer Gavin Polone said the company doesn't mind giving away its products.

"Apple won't pay to have their products featured, but they are more than willing to hand out an endless amount of computers, iPads, and iPhones," he says. "It's kind of a graft situation." 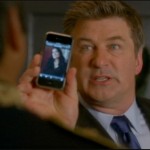 Apple Product Placement Rising On Television, In Movies
Nothing found :(
Try something else